Why and how geometric series are used for proofs?

I often see that someone uses geometric series for proofs related to time complexity, but also I can't understand why they are used. Are they making proving easier? And how can I use this 'tool' for proofs? Can I transform problems to fit to geometric series? 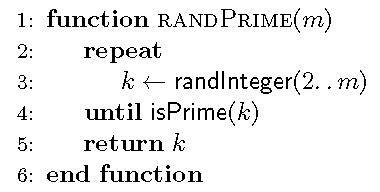 The pattern appears often because many randomly controlled loops behave like a series of coin flips!

If the different evaluations of P are stochastically independent and identical (i.i.d.), the probability of the loop executing for $k$ times is

this is exactly the probability weight of a geometric distribution. Therefore, it will appear in any analysis.

Many loops do not fall into this pattern, and then you will see other sums or recurrences during the analysis.

Okay, this is the first case of my comment. This isn't a "tool"; this is simply the formula that comes up when you try to estimate the expected time complexity. Or more precisely, the expected number of iterations of the loop.

Not the answer you're looking for? Browse other questions tagged algorithm-analysis runtime-analysis proof-techniques or ask your own question.

8
How to use adversary arguments for selection and insertion sort?
8
Why is the transform in Schönhage–Strassen's multiplication algorithm cheap?
6
Where does the lg(lg(N)) factor come from in Schönhage–Strassen's run time?
8
Why are non-relativizing proofs preferred to relativizing ones?
1
Running time of recursive algorithm with geometric series
2
Confusion about the definition of the average-case running time of algorithms
4
Why algorithms calculating non-tirivial zeros can't be used as proofs of Riemann Hypothesis?
2
Clarification of the proof involving the regularity condition in Master Theorem
11
Why are mathematical proofs so hard?