I came across this explanation for count to infinity problem 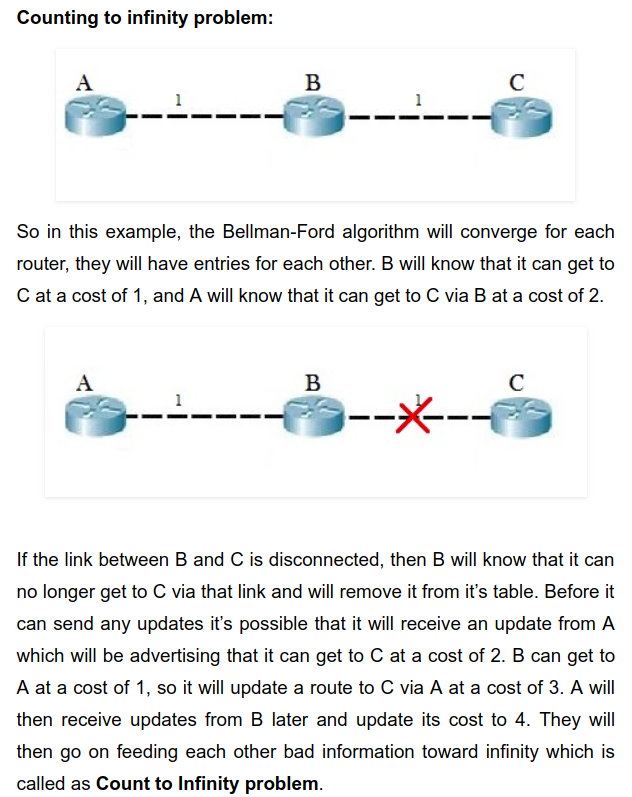 However, i don't understand that after the BC link broke, followed by which B erroneously updated the path to C at a cost of 3; Now why will A update the cost to C as 4 (after getting updates from B) since its current cost to C is 2 which is lesser than that advertised by B?

I'll describe what happens, and then describe why each router made the decisions that it made using the scenario from the question.

From the comments, your issue is with step $6$. If $A$ already has a route to $C$ in $3$ hops, why wouldn't it just ignore the worse route via $B$ in $4$ hops and stay at $3$ hops? Well, the purpose of a router is to route messages. If I give $A$ a message to send to $C$, it needs to know who to send it to so that it eventually reaches $C$. $A$ knows that it will need to send to the message to $B$ for it to most efficiently reach $C$. In particular, $A$ knows that its distance estimate for a route to $C$ is based on the distance estimate of $B$. So if $B$ says that the distance has increased, $A$ knows that the distance has also increased for it (unless it can find a better route).

To put it a different way, we're talking about a dynamic version of the Bellman-Ford algorithm where edges can be added or removed in an online manner. Removing edges, in particular, makes the updates no longer monotonic. That is, we can no longer only keep the "best" routes we've ever heard, and we instead have to deal with potential "retractions".

Returning the the original, simpler scenario, the issue is when $B$ receives an update from $A$ that $A$ has a $2$ hop route to $C$, $B$ doesn't know that this information is dependent on $B$'s route to $C$. If $A$ had said that its route to $C$ was via $B$, then $B$ would have realized that this route was no longer useful and would not have updated its routing table in step 4. The split horizon modification solves this particular scenario by simply not having $A$ inform $B$ about any routes that $A$ can only reach (directly) through $B$, so step 3 never occurs as far as $B$ is concerned.

Not the answer you're looking for? Browse other questions tagged algorithms graphs computer-networks or ask your own question.