We changed our privacy policy. Read more.
This site is currently in read-only mode; we'll return with full functionality soon. Follow @StackStatus or visit our status blog for more info.

What's difference between SUM and OR?

While studying ALU I came across this example, now what's difference between operations of OR Gate and SUM(Adder), in binary language 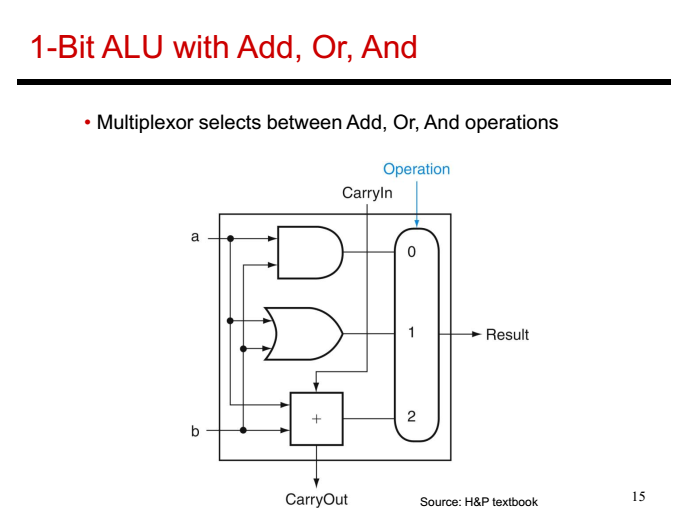 The OR and AND operations are 2-in 1-out.

An Adder is either 3-in 2-out (shown in your diagram) or 2-in 2-out (not shown). In part, because an Adder has 3 ins and 2 outs, it is composed of more underlying gates than AND and OR.

(But to be clear, it does not require new kinds of gates, the existing AND and XOR, OR, NOT gates, or the negating ones NAND, etc.. suffice.)

If we add two 16-bit numbers (not necessarily on a computer, but speaking mathematically) we get a 17-bit answer. (That we often send that answer back to 16 bits is to risk errors in our systems; and the potential for these errors require mitigation techniques, but that is off topic to this question.)

Think of base ten. In the general case, Two one-digit numbers add up to one two-digit number (though the upper digit may be zero). If we're doing long addition, we carry from one column to the next (going left). That carry going in means we're now adding 3 digits together, and the result is one digit along with a possible carry for the next column. That's why adders sometimes take 3 inputs and other times 2 inputs. The 2-input is for the least-significant-digit, whereas the 3-input is for the rest.

The last column has a carry out that is not used further, but just part of the result. This is why we get one more digit than have the inputs.

In binary the maximum inputs would be a=1, b=1, and CarryIn=1. That adds to 3 (decimal) and 3 is represented as 11 in binary. The first of those one's (from 11 in binary) is the CarryOut and the second pf those one's is the Result in your diagram.

This site is temporarily in read only mode and not accepting new answers.

Not the answer you're looking for? Browse other questions tagged computer-architecture boolean-algebra .

1
Is it possible to accurately determine the number of instructions required to multiply or add two integers in a modern processor?
30
What are system clock and CPU clock; and what are their functions?
16
How is a program executed at the CPU level?
3
Ripple Carry Adder
1
what is the difference between memory access and data memory access?
1
What is the relation between word size and size of internal register of a processor?
1
Does XNOR of three variable equals XOR of same three variables
0
How to "logically" solve boolean logic