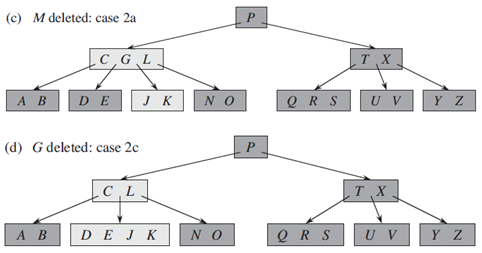 My doubt is do we always end up successor and predecessor node if they contain minimum number of nodes ($t-1$)? This is what authors must mean to say when they say "merge $k$ and all of $z$ into $y$" in step 2c. But I feel they might not be the predecessor and successor nodes, they are just immediate next children of key $k$, as can be seen in this example I tried out: 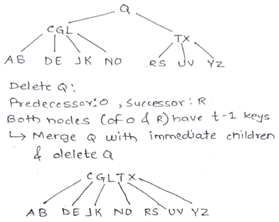 So am I right with "we need to merge immediate next children of key $k$ but not predecessor and successor node"? If yes, is book have mistake? Or book does indeed tries to say the same and I am misinterpreting? Or I got it all wrong? Or am unnecessarily overthinking?

You are probably overthinking it by thinking in terms of predecessor/successor nodes.

The rule just says, if the key to be deleted has both children at least capacity, you cannot take a predecessor(or successor) from its left(or right) child without violating the B-Tree property. So, we decide that we will merge it with both its children and push the decision to delete one level downward. That's it.

An intermediate step in 2c. would be where G is pushed downward and merged with [DE] and [JK] to give

Now we can apply the algorithm to this node [DEGJK], and since it's a leaf node, step 1 will apply here and we can simply delete G from it.

Not the answer you're looking for? Browse other questions tagged trees binary-trees search-trees b-tree or ask your own question.

1
Red Black Tree deletion algorithm (CLRS, 3rd edition) : Deleting the root
0
Is “promoting a key” a part of deleting internal node key in B+ Tree?
3
Red-Black tree height from CLRS
1
Deletion of record from B+ tree
1
Can a node of Radix tree which represents a valid key have one child?
0
Remove range of keys from Binary Search Tree in O(s+h)