For this problem, I heard that using a difference array can solve the problem but I can't seem to figure out how to solve this problem. Could anyone give me some advice? Please keep it simple since I am only a high school student preparing for the national infomatics Olympiad.

I've found a solution in Python , but I can't understand it.

You are laying N rectangular pieces of grey-tinted glass to make a stained glass window. Each piece of glass adds an integer value "tint-factor". Where two pieces of glass overlap, the tint-factor is the sum of their tint-factors.

You know the desired position for each piece of glass and these pieces of glass are placed such that the sides of each rectangle are parallel to either the x-axis or the y-axis (that is, there are no "diagonal" pieces of glass).

You would like to know the total area of the finished stained glass window with a tint-factor of at least T.

Output Specification: Output the total area of the finished stained glass window which has a tint-factor of at least $T$.

I have an implementation but I'm not quite sure how it works. Any explanation would be greatly appreciated.

First, I will look at this problem from a more (high-level) theoretical perspective and then go through the details required in an implementation, based on the solution you linked to. 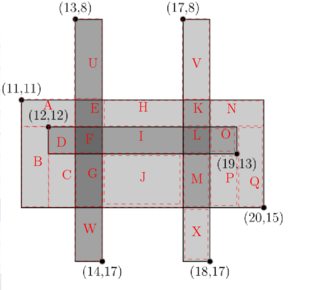 But how big can $R$ become? If we have some collection of rectangular portions of the intersection of $i$ rectangles and add a new rectangle, we create one new portions for each portion that is intersected by one of the four edges of the new rectangle. So how many portions can intersect the same horizontal line? At most $2i-1$, since the same horizontal line can be intersected by at most $2$ vertical lines for every rectangle added (apart from the first). So, after adding all rectangles, we get $R\leq \sum_{i=1}^N 4\cdot (2i-1) = O(N^2)$.

But implementing this efficiently could be rather tricky. Sure, it's easy to say that you can just add rectangles and create new portions as a result of their intersection, but that would be pretty cumbersome to implement and possibly inefficient.

This is where the 'difference array' approach comes in. The principle is slightly easier to explain with a 1D-array, so we will restrict the problem to that for now. Suppose we have input 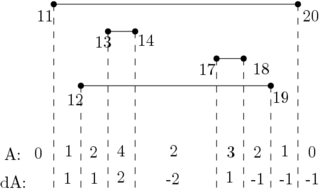 The array $A$ contains the tint values over all contiguous 'rectangles' in 1d, which is what we need. The array $dA$ is the difference array of $A$. Observe that this difference array can be easily found: after sorting the endpoints of our 'rectangles', we add the tint-value of the rectangle on the left side (when 'entering' the rectangle) and subtract it on the right side (when we 'leave' the rectangle). After we found are difference array $dA$, we can compute $A$ by noting that $A[i] = \sum_{j=1}^n dA[j]$. Then, we scan $A$ to find the areas that have tint $\geq T$ and add the area to our final value and we're done.

For 2D arrays, we do exactly the same thing, but now with an extra dimension to keep track of.

Not the answer you're looking for? Browse other questions tagged algorithms data-structures computational-geometry arrays or ask your own question.