I've finally more or less understood the recursive algorithm for solving the Towers of Hanoi. My Python code is below.

However one thing still bugs me - I can't yet work out how this simple seeming algorithm can "know" which move to make first - whether to the destination peg or the spare peg.

I can see it depends on whether there is an odd or even number of discs, and I understand how the algorithm works, thanks to this great article: https://www.geeksforgeeks.org/c-program-for-tower-of-hanoi/

It's just that first move that remains a mystery to me. Any clarification musch appreciated.

If you trace the recursion calls that your algorithm makes before it prints its first line, you will have if the first call is hanoi(n, 'A', 'B', 'C') :

To see if $ is equal to B or C, you just have to remark that the value of to_peg and spare_peg alternate each time so the disk to move only depends on the parity of n. In our example :

The first move is produced by the first recursive call in the code, which is repeatedly invoked many times, until the base case is reached -- printing the first move.

Hence, the last two arguments will be swapped n-1 times, until we reach n=1 triggering the base case.

Concluding, performing n-1 swaps, leaves those arguments where they are if n is odd, or swaps them (once), if n is even.

The broad idea behind solving Tower of Hanoi problem by recursion is this: 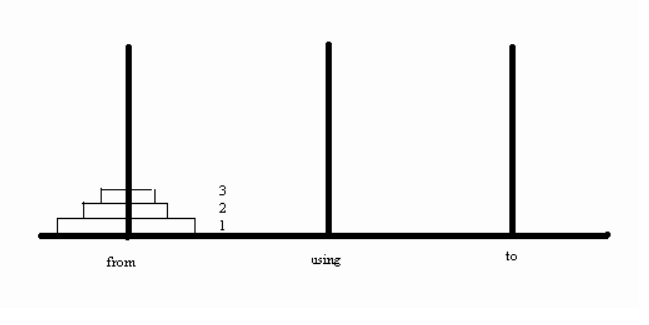 So, in order to find out the first move, we keep reducing the size of our aggregated disk until we reach the top 2 disks, or just simply call your code with n=2.

Now this line below

moves $1st$ disk from from pole to aux peg. Following which

moves $2nd$ disk from from pole to to pole. And finally,

You shall make an research with the state table and graph theory. Than You shall find the shortest path in graph. It usually is for games (and It's for chess too and complex games).

Not the answer you're looking for? Browse other questions tagged algorithms recursion towers-of-hanoi or ask your own question.