The maximum number of nodes in a tree up to a certain tier can be expressed by: 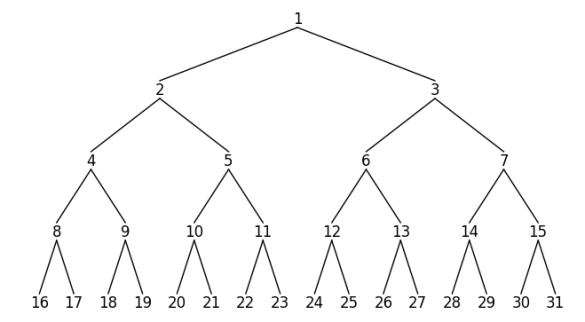 Frankly the same question popped up in my head, i tried to do the proof my self at first, but i did not succeed. So i searched for it, and came by this question, but noticed that the top voted solutions had the same ideas as me, so i came back to my ideas and came up with the following solution:

Lets look at an example of a small complete binary tree

I'm going to use 3 variables to make things shorter: L the level in which a node exists, g the global index of a node, s the subindex of a node in a level (the index of that node in that level). More explanation of these variables will come ahead

Notice that for this whole proof, i'm not starting my indexes at zero but at one to make things easier.

Notice that at each level the number of nodes in that level is 2^(L-1). Also since each level has 2^(L-1) nodes then the index at that level starts at 2^(L-1). Based on the previous info we get that

transforming this into an equation we get

where (2^(L-1)-s) is the steps that is left to reach the end of current level, and 2(s-1) is 2 steps we need to take for each node that came before the current node.

As an example say we want to get the left child of node (6), this means first we need to move 1 step to reach end of Level 3, then we need to take 4 steps (because of nodes 4,5 having two children's each) and one step.

so for first child of node (6) we get

I really liked Yuval Filmus' answer, but wanted to try explaining it a bit differently after it had clicked for me.

The idea of implementing a full binary tree with an array is essentially just assigning indexes to each node. We'll use 1-indexing, as you'll soon see why, to show that the indexes sneakily encode the normal tree traversal you would use to reach any node.

Normally we start from the root and then go downwards, traveling either left or right. Take the 26th node for example. To reach the 26th node, we take the following path:

Now note the binary representation of 26:

In order to achieve this, we left shift one bit (which is multiplying by 2) and then add either 0 or 1.

To use 0-indexing, all we have to do is add 1 everywhere to simulate 1-indexing.

Consider below tree and its array representation.

Now element at 0 index has children at indices 1 & 2. Similarly it is true for rest elements as below.

3
Find k maximum numbers from a heap of size n in O(klog(k)) time
5
Binary Indexed Trees: Why does i & -i work?
3
Balancing a Binary Search Tree
5
BIT: range updates, point queries; true meaning of tree[x]
1
Why does the given solution to this problem works? How can it's correctness be proven?
4
Heap structure in array, computing parent and child
1
Why does the formula floor((i-1)/2) find the parent node in a binary heap?
0
Amortized analysis - adding operations to a data structure
1
Given an array A and a minimum heap H which of the following are true?