CURE algorithm: what does moving the representative points towards the centroid do?

The CURE algorithm is a method of clustering data. An outline of it can be found here on slide 5: https://www.slideshare.net/ellepiu/cure-clustering-algorithm. I personally learnt it from this video: https://www.youtube.com/watch?v=JrOJspZ1CUw, where the algorithm is explained at 7 minutes.

This is my understanding of the process of CURE. Let's assume that the data set is large enough such that we have to store a portion of the data on disk.

To me, this selection of representative points seems like a really arbitrary thing to do, and I don't really see the logical process behind choosing to do this.

Could someone please help explain in more detail the reasoning behind doing this? (Beyond just the basic pseudo-algorithm I have seen.)

I think that when moving the representative points towards the centroid of each cluster, this is equivalent to shrinking the boundary of the cluster. Once this is done, the data points that remain outside of the boundary are eliminated as clusters. But I'm not sure if this is correct.

If I'm understanding your question correctly, you are interested in why the representative points are chosen as such, why they are merged and why this works. I'll first go over some background for CURE, then I focus on this particular question.

I think we should start with the intention of CURE. To see that, we look at slide 14: 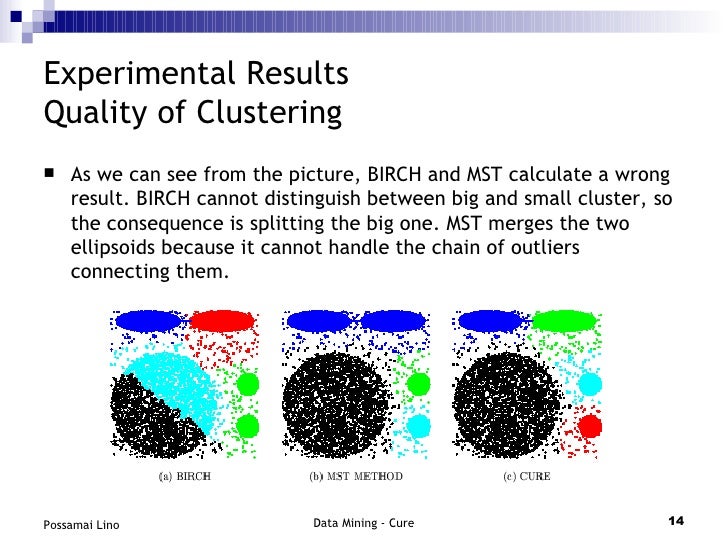 Here, CURE is compared with BIRCH and MST. We see that BIRCH succeeds in identifying the top ellipsoid pair as different, but fails to detect the large disk as a single cluster. BIRCH seems to only support same-sized clusters, So BIRCH doesn't make some clusters big enough and others too big. MST successfully classifies the disk as a single cluster, but fails to separate the ellipsoids on top. MST makes the clusters too big.

So, BIRCH is an attempt at trying to 'hit' the sweet spot between BIRCH and MST, in the hope of creating better clusters. In this example, it seems to be working pretty well.

Okay, that's nice and all, but what prevents CURE from merging the two ellipsoids above, as BIRCH does? CURE doesn't do this (or is at least unlikely to do so), as the representation points are well scattered. This means that it is only likely that two clusters that are touching each-other on a location with high density get merged (as otherwise many representatives being close has low probability). As the two ellipsoids only touch each-other at points with low density, CURE (with carefully chosen parameters, no doubt) detects them as different.

We've seen that CURE sometimes has to merge two smaller clusters into a bigger one. The question is how to handle the representative points. The simplest way to do this is to simply add them to the new cluster. But this isn't a good idea. For their original clusters, the representation points were well scattered. But if we simply use the same points for our merged cluster, this is no longer the case.

This is a problem, because if there were another disk-like cluster nearby ('connected by a chain of outliers', as the authors would say), the fact that the representation points are too far to the edge of our newly merged disk means we're likely to put the two disks in a single cluster. Note that this process can occur many times at different hierarchical levels, so if we don't solve this, we won't get nice results.

So, the solution is to move the representation points a bit closer to the center, as this makes them more well-scattered and therefore decreases the probability that we make a bad merge.