Can anyone please help me understand the quasi-liveness and liveness properties of petri nets. Suppose that you explain that to a person with 10 years old.

Am i right ?, can you give me a simple example. Finally what is the best method to find these properties ?

Figure 1 A Petri Net that is Quasi-Live 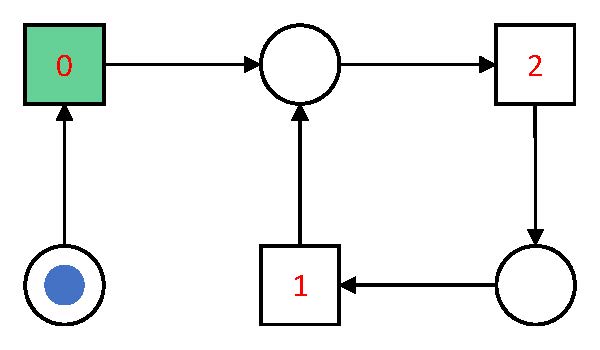 The Petri Net and its initial marking in Figure 2 is live and quasi-live. Every transition in the net can change colours from green to white more than once.

Figure 2 A Petri Net that is Live and Quasi-Live 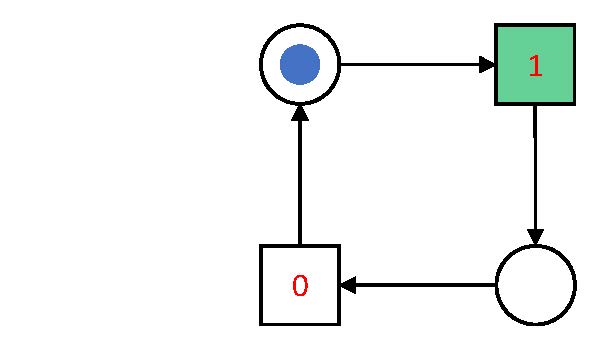 The Petr Net and its initial marking in Figure 3 is neither live nor quasi-live. Transition 1 will never change colour from green to white. 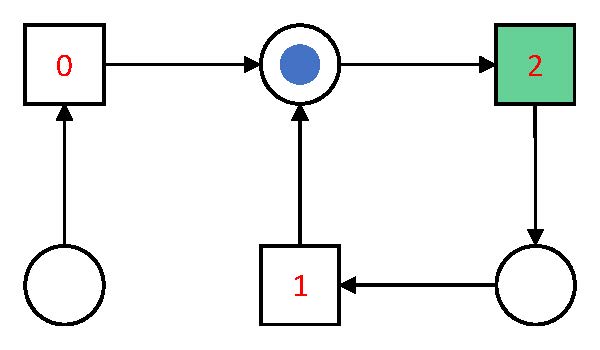 To answer your first question:

An attempt to explain Petri nets in terms some 10-year olds will understand (see, for instance, Murata's well-known description): 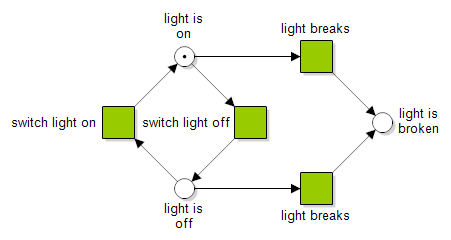 In the example above, the marking has only one token, in light is on. Only two transitions can fire: the upper light breaks and light is off.

If instead, switch light off fires, we end up in the marking that has one token in light is off and no tokens elsewhere. In that marking, two transitions can fire, namely the lower light breaks and switch light on.

If instead, switch light on fires, we end up in the marking that we started with.

With that out of the way, we can describe quasi-liveness and liveness:

In the example above, every transition is quasi-live: as we have seen, two transitions can fire directly, while for the other two, a transition can fire such that they can then fire.

A marking is said to be quasi-live if all transitions are quasi-live for that marking. In other words: in the present situation, all changes can still occur, either right away or later. This is the case in the example above.

A marking is said to be dead, a deadlock, if no transitions can fire. No changes can ever occur. This is the case for the marking we reach after firing one of the light breaks transitions.

A transition is said to be live if it is quasi-live in every possible marking. That is to say: in any situation, that change can still occur, either right away or later. In the example above, no transition is live: we have found we can reach a dead marking, in which none of them can fire.

A Petri net is said to be live if all of its transitions are live. In any situation, all of the changes can still occur. Clearly, this is not the case in the example above.

We can change the example by adding new transitions: repair light. That would give us a live Petri net.

To answer your second question: a standard reference for how to determine liveness of Petri nets is Murata's article mentioned above. I recommend it; it is readable and the techniques it describes are readily applicable.

Deciding whether an arbitrary Petri net is live is possible, but very hard. See, for instance, this informal discussion by prof. Javier Esparza. A fairly recent article (E. Best and H. Wimmel, Structure Theory of Petri Nets in: Transactions on Petri Nets and Other Models of Concurrency VII, 2013) says:

For liveness we know that it is at least as hard as the reachability problem. The latter is EXPSPACE-hard, and no upper complexity bounds are known at the present time.

So researchers have focused on defining limited classes of Petri nets for which properties such as liveness are easier to decide; for instance, it is co-NP-complete for free-choice nets.

Not the answer you're looking for? Browse other questions tagged automata petri-nets or ask your own question.

3
Can a petri net fire only one transition at a single moment?
1
What mathmatical model shall be used for describing P2P processes interaction?
5
Which class of languages is accepted by PDA when we restrict the stack to logarithmic size?
3
How to Generate Control flow graph from a Petri net model?
1
Is there a difference between "marking", "configuration" and "state" in Petri nets?
2
Single Input Single Output Sequential Circuit Explanation Required
0
What the State is, and Where it comes from, when Generating Reachability Graphs
2
Benefit of Petri Net Transition as Separate Object
0
Is this concatenation of two FA done right?
1
Is it decidable whether a given Turing machine moves its head more than 481 cells away from the left-end marker, on input ε?