I'm a student of Formal Methods in Software Engineering, I'm trying to study this question for two days but still haven't figured it out, I couldn't even find a similar solution or explanation, so please if anyone can explain in detail the question and it's solution I've provided in the image, it'll be a real help. One last thing, my guess is that the solution provided in the image is not correct, or maybe its my logic that isn't, so please help me with this. Thank You. 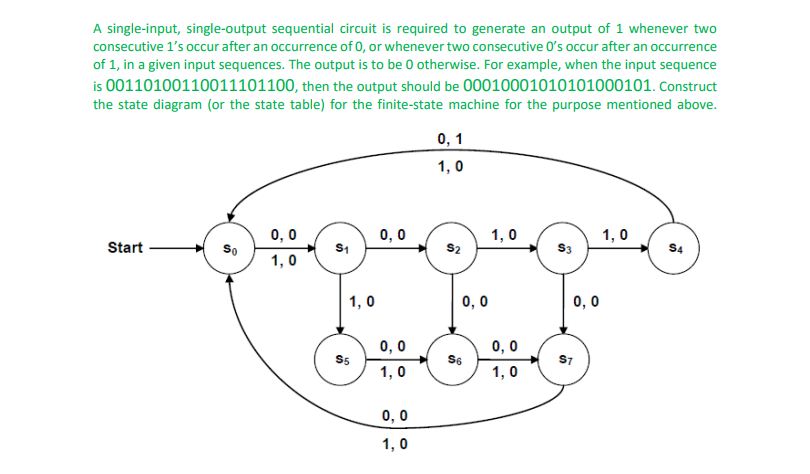 In fact, you can also build a non deterministic FSA that does the job then turn it into a FSA.

Another solution is to create a set of states representing the last one or two inputs, namely 0, 1, 00, 01, 10, 11 in addition to a start state. The transitions are obvious. 1 is emitted when transitioning from 01 to 11 or from 10 to 00. In fact state 11 can be merged with state 1 and state 00 can be merged with state 0. That leaves us with a total of 5 states that should do the job. I assume here that the outputs are emitted upon transitioning. Assuming the output is emitted upon entering a state, then states made of the last 3 inputs need to be made. Similarly, some states can be merged.

Not the answer you're looking for? Browse other questions tagged automata finite-automata formal-methods software-engineering sequential-circuit or ask your own question.

12
Single-tape Turing Machines with write-protected input recognize only Regular Languages
1
What is the purpose of a single input, single output, bidirectional shift register?
1
Reverse the input and output of a Mealy machine
4
An example of something you can formally verify with proofs in Software Development
1
What will happen if input is larger than required in a NFA
1
If a DFA were implemented as a circuit, what would the empty string correspond to as input?
2
Is it possible to constract Moore or Mealy machine with a different size of input and output?