How to prove that non-antipodal vertices cannot be a diameter of a convex polygon?

I am learning Shamos's rotating calipers algorithm for finding the diameter of a convex polygon in his Ph.D. thesis; Page 78.

Problem: How to prove that non-antipodal vertices cannot be a diameter of a convex polygon?

My Informal Attempt: See Figure 3.23. Intuitively, by rotating the line $DC$ about $C$ and then $CB$ about $B$, we can get two parallel lines of support passing through $F$ and $B$. However, is $FB$ necessarily longer than $FD$? If so, how to prove it?

I find it easier to prove the equivalent statement 'any pair $A,B$ such that the segment between them is a diameter of $P$ must be anti-podal':

I claim that the lines $l,k$ are parallel lines of support. These lines are parallel, as they are perpendicular to the same segment. To see that they are lines of support, suppose to the contrary that $l$ is not a line of support. As $A$ lies on the boundary of $P$ and in $l$, $l$ intersects the boundary of $P$. So $l$ can only not be a line of support if it intersects the interior of $P$. But this means that there is a point $X$ in $P$ ('beyond' the line $l$) such that $|XB|>|AB|$, contradicting the fact that $s$ is a diameter of $P$! 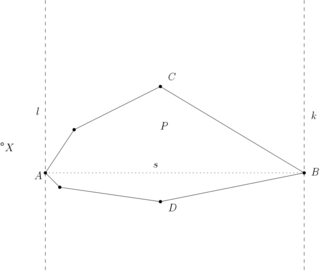 Be careful though, as the converse of the statement, 'Any segment such that the endpoints $A,B$ of that segment are antipodal in $P$ is a diameter in $P$' is false. As a counterexample, take a (non-square) kite (or take the sketch above). Clearly, the two pairs of opposing corners are anti-podal, but only one of the segments between the pairs is a diameter! Your informal attempt seems to try to prove this. As what you're trying to prove is false, it isn't surprising that formalizing the proof fails!

Note that I don't use the fact that $P$ is convex. You can check that this proof also works for non-convex, but simple polygons (it might even work for non-simple polygons, but these things are awful, so I'd rather not make claims about them). Note that in the case of convexity, the diameter need not necessarily be contained within the polygon, but all definitions still apply.

Not the answer you're looking for? Browse other questions tagged computational-geometry convex-hull or ask your own question.

7
Convex polygon formulation
2
Maximum Enclosing Convex Polygon of a Given Area
4
Is there an efficient algorithm to extract the farthest ends of a thin contour?
4
Convex-hull of a star shaped polygon in O(n)
4
Maximal expansion of a convex polygon
3
3D gift wrapping algorithm: how to find the first face in the convex hull?
3
Algorithm for animating/morphing convex polygon diagrams
3
Prove vertices of polygon are endpoints of disjoint line segments
2
Efficient algorithm to compute the diameter of a convex set?