I already understood how the well-known algorithms like Graham's scan, Quickhull, etc. work, but I have difficulties in understanding 2 naive algorithms to compute the convex hull:

The first problem and corresponding algorithm are as follows.

The second problem is as follows.

And here is the algorithm: 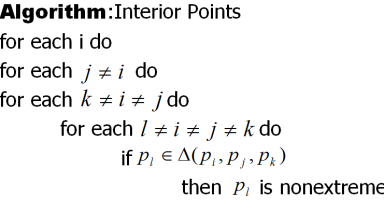 Shouldn't the first part of the sentence (of the problem) be

My counterexample why this algorithm wouldn't work:

A1) You're right, the algorithm description sounds kind of weird. A naive algorithm that takes exponential time would rather be something like

However, the method for checking whether R is a convex hull needs $n$ time, so we obtain a runtime of $n2^n$.

A2) Your premise is missing some quantifiers. I think, what you wanted to say is

This still does not give you a convex hull algorithm though, since the points still have to be sorted by the end. However, this is no problem, since the rest of the algorithm already needs $\mathcal{O}(n^4)$ time.

2
Validating a sequence of points as a convex hull
5
Determine whether a point lies in a convex hull of points in O(logn)
4
Convex-hull of a star shaped polygon in O(n)
6
How to find the supremum over all the "good" (interior) polytopes for a given set of 3D points?
3
3D gift wrapping algorithm: how to find the first face in the convex hull?
3
Difference between convex hull algorithms
1
How can vector angle comparison between lattice points be done without using floating-points? (Convex Hull)
1
Computing convex hull by triangle point inclusion