I saw a hint on solving this question which is given in the following picture: 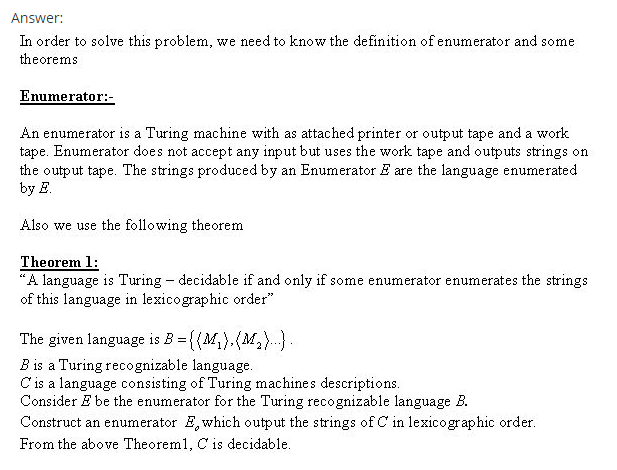 But I have a difficulty in constructing such enumerator $E_{0}$, Also how will I show that every machine described in $B$ has an equivalent machine in $C$ and vice versa, could anyone help me in doing so?

Also it is worth to say that the solution of this problem is found here:

But I could not understand it. could anyone explain the solution for me in a simple way ? and in a way depending on the above hints?

Recall the padding lemma: given $\langle M \rangle$ we can compute $\langle N \rangle$ where $N$ is equivalent to $M$, but has a longer representation. (Essentially, we can always add more irrelevant states to a TM, effectively.)

By construction, $E_0$ prints larger and larger strings, hence its enumerated language is decidable: this is the wanted language C.

Not the answer you're looking for? Browse other questions tagged formal-languages turing-machines computability undecidability or ask your own question.

4
Show a TM-recognizable language of TMs can be expressed by TM-description language of equivalent TMs
19
Is the unsolvability of the N-Body Problem equivalent to the Halting Problem
6
A non-mechanical way to get an infinite decidable subset of a Turing-recognizable language?
3
Non-recursivity of language of TMs which have equivalent TMs of smaller and larger description length
4
In which direction should I carry out a reduction when proving decidability/recognizability?
1
Constructing a decider for a language
1
Show that the single-tape TMs that can not write on the portion of the tape containing the input string recognize only regular languages
1
Show that a decidable language is not decided by a decider in a given set