Show that the single-tape TMs that can not write on the portion the portion of the tape containing the input string recognize only regular languages.

The first part of the answer in a book said that:

Given below the whole answer (sorry for using pictures but the answer was so long and I do not understand it and I have not enough time to write it): 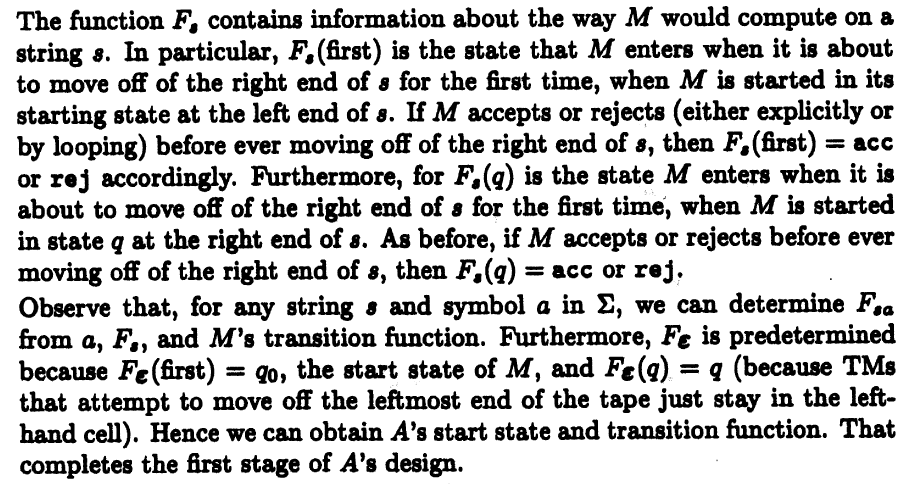 But I do not understand many points:

Could anyone clarify the above questions for me please?

I saw an answer for the question here Single-tape Turing Machines with write-protected input recognize only Regular Languages but I did not understand it at all.

The general idea is that the TM has only finite memory while being in the input part of the tape. It can do arbitrary computations in the right part of the tape, but it can only observe a finite memory footprint of the input. It starts in the input part (on the left) and it can reenter the input part (from the right) arbitrarily often. But each time it enters the input part, the only thing that matters is the state it has when entering (or the fact that it starts from the left). And the only outcome of processing the (read-only) input part is the state it has when it exists (or the fact that it does not exit because it has accepted or rejected in the mean time).

Both domain and codomain are finite, hence so is the set of functions. Although the definition is about infinitely many words $s$, there will only be a finite number of different functions $F_s$.

3) By now we have fully defined the automaton, except for acceptance. And the automaton state fully describes what the TM can do with the word we have read. We have not yet said anything about the part of the TM's computation that happens outside of the input word. The trick is that we do not have to delve into that computation. We just say that the state $F_s$ is accepting, if the word $s$ belongs to the TM's language. The paragraph has an explanation why that is well-defined.

Actually, you don't need to construct the DFA, you just need to show that it exists using the Myhill Nerode theorem.

Here's how: given a machine $M$ that cannot write on its input, suppose the input has a prefix $s$. We can then ask the following questions:

Let $G(s)$ be the tuple of answers to the above for any string $s$. The answer to 1. is one component of the tuple, and the answers to 2. (one for each $q$) are the other components. We can make two key observations:

I. The number of possible values of the tuple is finite. This is because the value of each component is either a state $q^\prime$ or "accept" or "reject". Hence, the possible values is just a simple cartesian product.

Observation II. can intuitively be seen by noticing that for any $s$ and $t$, when the tape is in the portion after the $s$ or $t$, we know that there will be no differences, as long as the same $z$ is chosen as the suffix for both. Additionally, if $G(s) = G(t)$, then we know that the behavior is also identical within the $s$ or $t$, hence it is identical for the two everywhere in the tape.

I. and II. allow us to divide all possible $s$ into a finite number of Myhill-Nerode equivalence classes. Hence, a DFA recognizing the language of $M$ exists.

Not the answer you're looking for? Browse other questions tagged complexity-theory turing-machines computability or ask your own question.