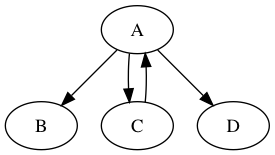 2
Characterizing cycles in a directed graph with optional edges
3
Proving algorithm for removing nodes from a complete graph with two kinds of edges
2
counterexample for this graph isomorphism algorithm
4
What graph theory algorithm(s) would help solve this problem?
2
Do graphs with a bounded number of incident edges have a polynomial-time subgraph-isomorphism algorithm?
2
From a directed graph (A), produce an undirected graph (B) with an edge for at least one outgoing edge for every vertex in A, minimizing edges