Could a standardized ternary system be more efficient than the binary system? [duplicate]

The following three examples show an ASCII word converted to both binary and ternary, along with the length of the sequence:

As denoted by the character count, the length of the ternary sequence can sometimes be less than half the length of the binary sequence. Having shorter sequences would be beneficial for file transfer, file storage, and computational processing speeds. On the surface this seems preferable, but perhaps there are disadvantages or implementation flaws which I am overlooking. The following contains additional observations (which may or may not be feasible), for implementation.

Ternary would be highly beneficial for file storage but would require hardware changes. For example, manufacturers of flash memory storage devices such as flash drives or solid state drives would have to re-architect the transistors in order to store the representation of a 0, 1, or 2. If these transistors could maintain the same size dimensions as the current transistors that store the representation of a 0 or 1, the storage capacity has the potential to double.

File transfer speeds appear to have potential to increase with a ternary system. In the case of wireless transmissions, binary is generally preferred over analog due to its increased ability to maintain information integrity and is easier to distinguish when interference is present. The following diagram demonstrates this principle. 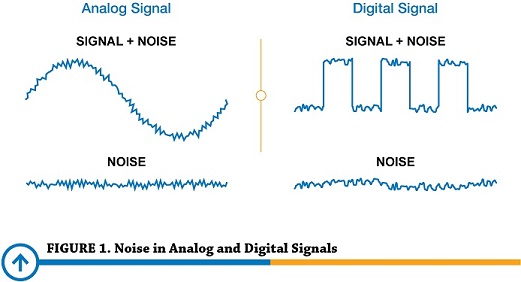 I imagine the implementation of ternary in wireless systems to appear like the following diagram (drawn quickly), having the peak and trough like a binary signal along with an ‘in-between’ to represent a 2. Having an ‘in-between’ might make the signal become less interference-tolerant than binary, which could be a disadvantage. 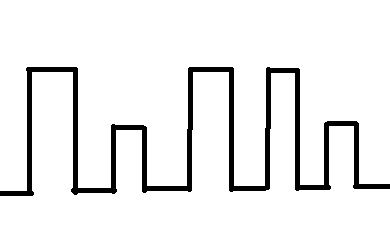 Thanks in advance for responses. Feel free to address unconsidered factors of why ternary may or may not be feasible and/or a beneficial alternative to the binary system.

EDIT: This question was flagged as a possible duplicate question. Keep in mind that an important aspect of this question is file transmission, which has been unaddressed in previous related ternary questions.

Whether this is more efficient depends on the physical properties of the medium, not on any fundamental principle of computer science. And of course there's no reason to limit yourself to ternary systems; we can consider systems with $k$ levels, where $k$ is any integer with $k \ge 2$ (it doesn't have to be limited to $k=2$ or $k=3$).

On the other hand, digital circuits -- as typically used in a CPU -- seem to be most effective with two-level modulation (i.e., binary, $k=2$). Why? The physics are different.

So, yes, sometimes this is more efficient, and sometimes it is not. It all depends on the specific properties of the hardware you're working with. Those properties are a matter of electrical engineering and physics, rather than of computer science.

There's lots more on this subject at Ternary processing instead of Binary, Why Do Computers Use the Binary Number System (0,1)?, and Could computer architecture be reworked to support switching from binary to ternary, for example?, for starters.

Not the answer you're looking for? Browse other questions tagged algorithms computer-architecture communication-protocols storage binary or ask your own question.

30
Why Do Computers Use the Binary Number System (0,1)?
4
Ternary processing instead of Binary
3
Could computer architecture be reworked to support switching from binary to ternary, for example?

4
Ternary processing instead of Binary
48
Factorial algorithm more efficient than naive multiplication
16
Will the future quantum computers use the binary, ternary or quaternary numeral system?
56
Why is binary search faster than ternary search?
1
More efficient vertex-labelling algorithm than BFS?
3
Could computer architecture be reworked to support switching from binary to ternary, for example?
0
Operating System code suffers more cache misses than user code