Trying to understand interpretation and denotation in FOL

I am going through the book "Knowledge Representation and Reasoning" by Brachman and Levesque.

Then it has been written that $ I $ will assign meaning to the predicate symbols as follows:

Now for denotation it is written that for an interpretation $ F = \langle D,I \rangle $ we can specify which elements of $ D $ are denoted by variable free term FOL.

I am a bit confused about how to interpret the last two rules.

So the act of choosing elements from $ D $ to represent the arguments of the function symbol is represented by $ \mu $? Will it be right to say so?

The output is evaluated by computing $ G $ for values which get substituted in the argument which is represented in $ d_i = \| t_i\| _{f \mu} $ of the second rule.

But I could not understand how are the above two rules recursive? What exactly should I conclude about the way $ I $, $ G $ , $f$ and $ \mu $ are related to each other and what exactly do they mean? Is my understanding correct?

Attaching the screenshots from the book: 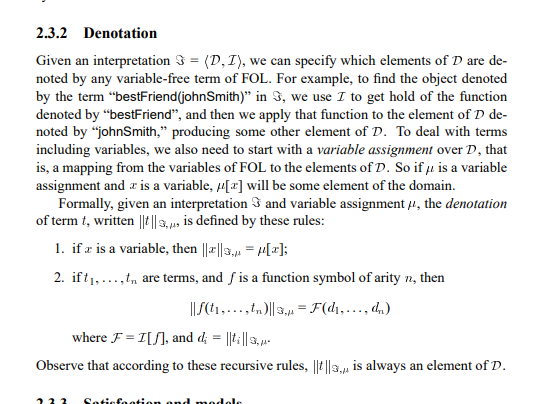 Consider the expression $+(x,\times(y,y))$, which is the FOL way to write $x+(y\cdot y)$. If I substitute $x=3$ and $y=5$ and do the arithmetic over the integers, what do I get? I need to evaluate the expression recursively.

The formal definitions you quote in your question attempt to capture the preceeding process in an abstract form. It's best if you work out the correspondence on your own.

Not the answer you're looking for? Browse other questions tagged logic first-order-logic knowledge-representation reasoning or ask your own question.

1
Resolution and incomplete Knowledge Base
1
Difference between intended interpretation and extended interpretation in first-order logic
7
Differences between basic, complex and terminological facts in a Knowledge Base using First-Order Logic
7
What is the purpose of interpreting elements in the proof of reduction of PCP to validity decidability problem of predicate logic?
3
What is the difference between $x:A$ and $x \Xi A$?
5
Why is this expression (A and ¬A |= C) entailed?
3
Represent there are infinitely many in FOL