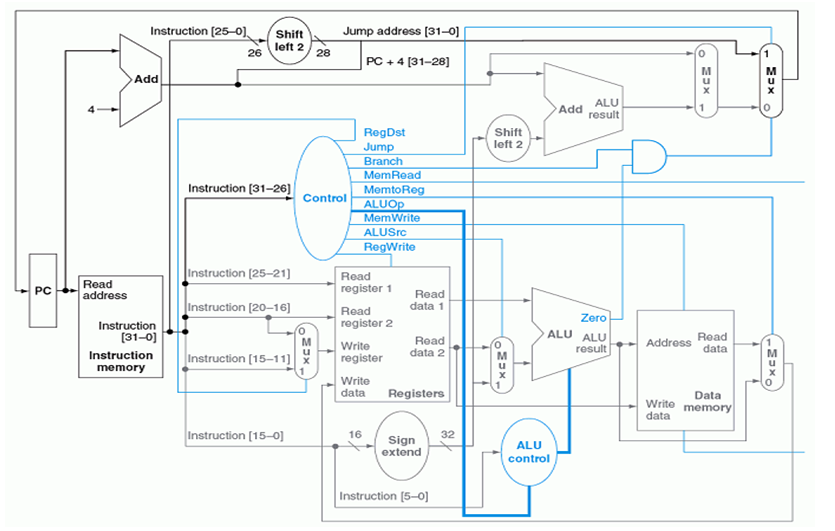 I have question about the ALUOp control signal.

When doing R type instructions, 31-26th bits are all 000000. What decides the instruction is actually the func field of 5-0th bits.

In that case, I wonder why the ALUOp signals for the R type(add,sub,and,or,slt) below the table should all differ. I don't know why ALUcontrol needs to receive data from both instruction and Control when ALUOp for R type looks useless.

Can't ALUcontrol tells ALU what operations to do by just receiving 5-0th bits? If so, all the ALUOp signal can be all same for the R type.

Can't ALUcontrol tell ALU what operations to do by just receiving 5-0th bits? If so, all the ALUOp signal can be all same for the R type.

Not directly, it doesn't appear so. I don't see a simple bit pattern in the bit 5-0 that would result in the proper "ALUOp" shown in the table, so a lookup is necessary, which is what "ALU control" is doing when the ALUOp coming from Control is for 000000 (R-type).

I don't know why ALUcontrol needs to receive data from both instruction and Control when ALUOp for R type looks useless.

This is because "ALU control" is also used by I-type instructions — lw & sw, addi/u, which use the add function of the ALU in computing an effective address, as well as slti, andi, ori, xori, which also require the ALU.  Note that the ALUOp for lw & sw is 010, the same as add (as they use the ALU to compute the effective address).  Further note that the ALUOp for sub and beq are also 110, which makes sense because a beq is comparing the two (albeit for equality, so xor might also have been used).

We don't see the other I-type instructions in the table, but you can imagine the slti/u also use ALUOp 110 for subtraction and addi/u also use 010 for addition, and that, andi, ori, xori, use the same codes as and, or, xor.

The J-type instructions have their own dedicated adders so, no need for ALUOp.

Not the answer you're looking for? Browse other questions tagged computer-architecture cpu mips or ask your own question.

2
How to evaluate the clock cycle for MIPS single cycle CPU
0
About Control Unit in CPU and Clock Cycle
1
What are advantages / disadvantages of horizontal and vertical microprograms?
0
MIPS control signal table(R-type add)
1
If the MOVE instruction in a Transport Triggered Architecture can implement a NAND gate (as a Functional Unit)
0
How to make single cycle processor pipelined?
0
What will a given CPU architecture do in the event that we were to invert all of the instruction bits to a given instruction?