In what case would bi-directional BFS have a worse asymptotic run time than regular BFS?

I am trying to prove that bidirectional BFS could have a worse run time than regular BFS. I am confused on how this would be possible, considered bidirectional BFS always divides the run time in two, since it is executing two searches. Would a specific order of nodes and vertices have to take place in order to give bidirectional a worse running time? Or is it a quantity issue?

Edit: Here is a graph I made. I'm assuming bi-directional BFS would infinitely search in this instance because if search one went right, and search two went left, they wouldn't find a path. Then, search one would go left, and search two would go right. Doesn't this mean that the search would run infinitely, because it doesn't stop until both have found the same path? 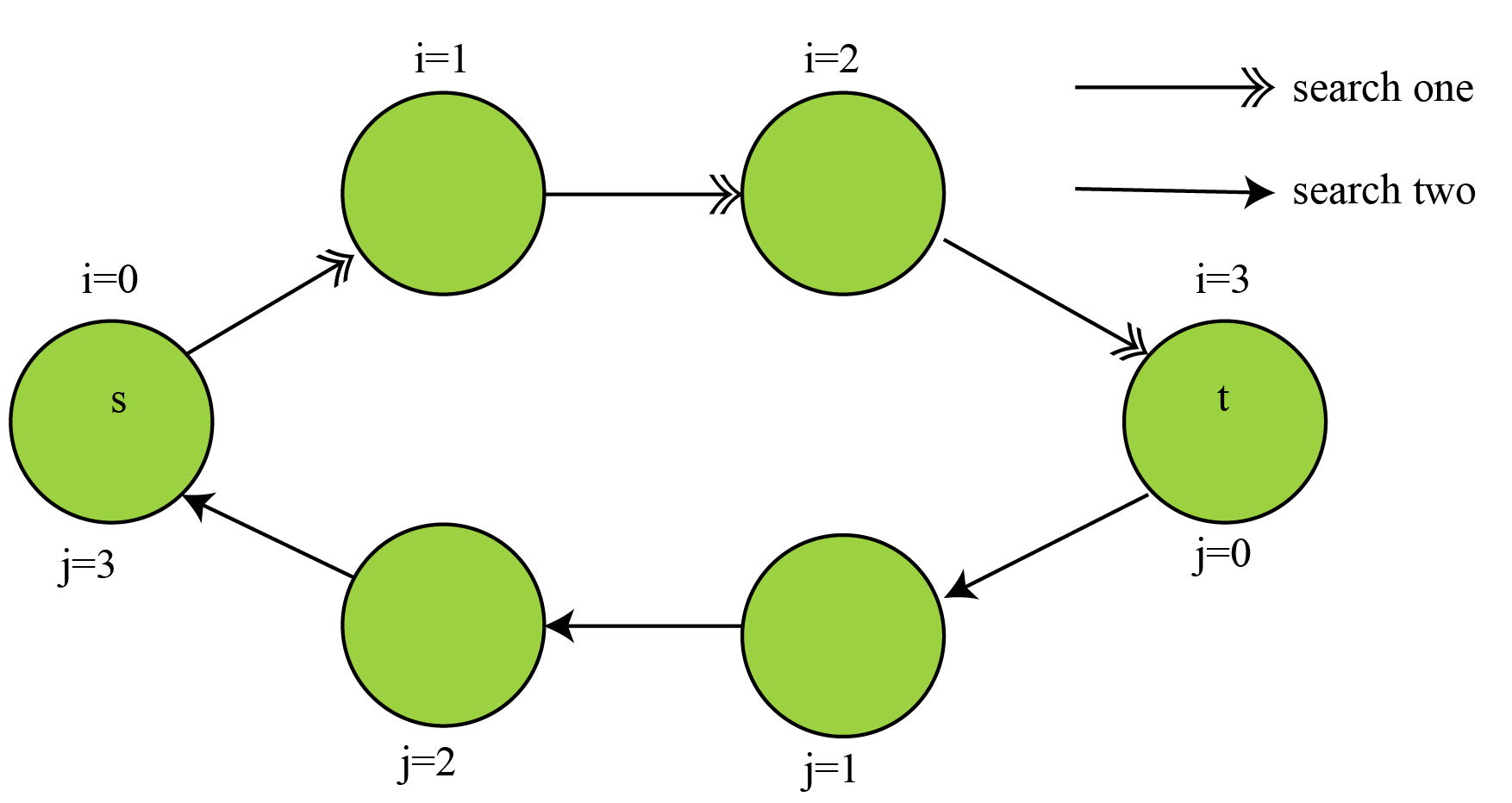 When attempting to find a path from a source vertex $s$ to a target vertex $t$, with both BFS and bi-directional BFS, if you assume a fairly steady branching factor $b$, the number of possibilities checked (and hence the running time) is dependent on the depth. For BFS the depth is the distance from the source to the target, giving $b^{k}$ vertices visited, for bi-directional BFS the two searches meet in the middle, so it's two lots of half-distance searches - $2\cdot b^{k/2} = 2\cdot\sqrt{b^{k}}$, which is clearly better.

So to get a worse time, you need a route from $s$ to $t$ that traverses very few vertices, but the route from $t$ to $s$ would visit many vertices. Essentially you want an asymmetric branching factor.

The family of star graphs would be sufficient for this. A star graph has a single central vertex, and all other vertices are connected directly to it, and no other vertices. So if you have $s$ as one of the pendent vertices, and $t$ as the central vertex, normal BFS would take constant time, and bi-directional BFS would take linear time. You can also invent more complicated examples that share this property of a low branching factor going one way, but a high one coming the other (up to a point).

0
How to construct the found path in bidirectional search
3
Bellman-Ford and zero-distance cycle
3
Shortest path in a dynamic tree with vertex updates
2
Is there a way to check if a path in a graph is infinite?
1
How to find the minimal path cost from left edge of a grid to the right edge using dynamic programming?
1
Shortest path from source to destination in directed acyclic graph
4
DFS and BFS Time and Space complexities of 'Number of islands' on Leetcode
6
Find a path from s to t using as few red nodes as possible