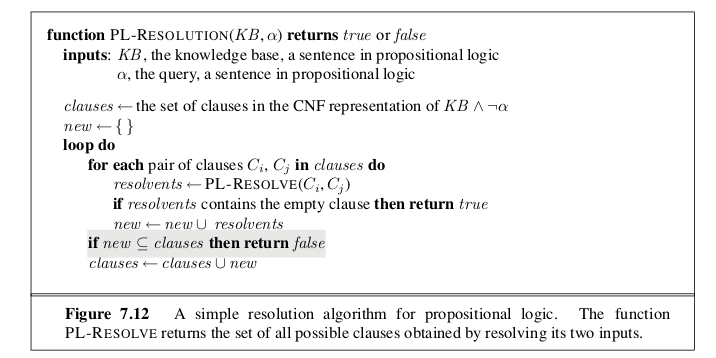 The standard resolution algorithm returns false if no new clauses are added.

I know that if $KB \land \neg a \implies []$, it returns true by proof by contradiction, but how can I understand the false case intuitively?

When $new\subseteq clauses$ then, if we continued, the next line would be $clauses \leftarrow clauses\cup new$ but $clauses\cup new = clauses$ so we'd be doing the exact same calculation the next time through the loop deducing nothing new and looping forever.

The point is, if we "resolve" all pairs of clauses and deduce nothing new, then we've derived all the consequences from the original set of clauses. If we still haven't derived a contradiction at that point, then $\neg\alpha$ is consistent with $KB$ and thus $\alpha$ is not provable. This last isn't necessarily completely accurate either, as it only shows that $\alpha$ is not a propositional consequence of $KB$. For example, if $KB$ was $\forall x.P(x)$ and $\alpha$ was $P(t)$, then $\alpha$ is provable from $KB$ but not via propositional reasoning.

Not the answer you're looking for? Browse other questions tagged logic artificial-intelligence propositional-logic or ask your own question.

4
Resolution complexity versus a constrained SAT algorithm
8
A tentative satisfiability algorithm
2
In the Resolution equivalence ($\neg A \implies B, B \implies C \models \neg A \implies C$) must $A$ be negated?
3
Generalization of Horn clauses in logic programming?
1
Is it an open problem if generalized resolution is always possible?
1
General resolution in first order logic
2
What were the shortcomings of Robinson's resolution procedure?
2
Resolution algorithm does not seem to generate the empty clause