The question and its answer is given in the following picture: 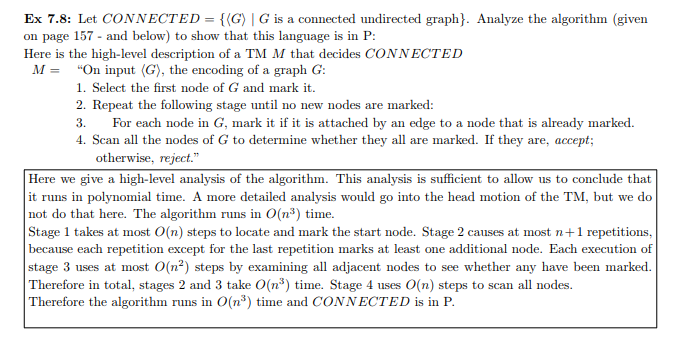 Step 2 causes at most $n$ repetitions since each repetition other than the last one marks a node which wasn't previously marked. Since there are only $n$ nodes and one of them is marked in Step 1, there are at most $n-1$ repetitions which mark a new node, and one more which doesn't (and so moves to Step 4).

As for how many steps does this take when implemented on a Turing machine, this depends on the implementation. Outside of introductory courses on theory of computation, we almost never consider Turing machines, preferring instead to work with more intuitive models such as the RAM machine. Therefore mastering the intricacies of Turing machine behavior is not so important.

Not the answer you're looking for? Browse other questions tagged complexity-theory turing-machines computability time-complexity p-vs-np or ask your own question.

3
Proving that NPSPACE $\subseteq$ EXPTIME
4
Show that the Halting problem is reducible to its complement
2
Why is Clique NP-complete while k-Clique is in P for all k?
3
Non recursively enumerable language proof by reduction to non-HP
0
Is there any polynomial time algorithm for a restricted EXP-time problem?
0
Show that the single-tape TMs that can not write on the portion the portion of the tape containing the input string recognize only regular languages
1
Space/Time Hierarchy Theorem - proving the language of the machine is in the larger space class
1
Is the language {<p,n> | p and n are natural numbers and there's no prime number in [p,p+n]} belongs to NP class?
1
Why is the run time of an $f(n)$ space decider bounded by $2^{O(f(n))}$?
2
Halting problem in EXP-complete