How does in-order traversal in Binary search tree works (recursion)

I visit some question but their implementations are slightly different and my doubt is not like theirs. I have this code in Javascript.

The code is typical BST implementation with methods to support in-order traversal. The code that is the most relavant for this question is the the inOrderTraverse and inOrderTraverseNode. I cannot understand how this code work.

The code that will use the BinarySearchTree "class". 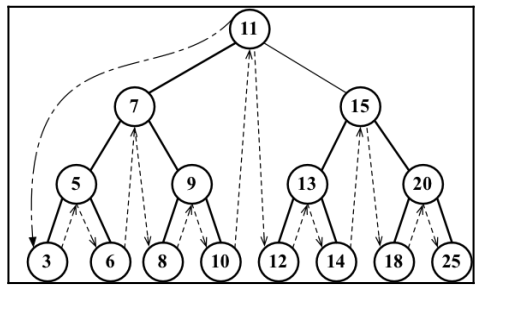 I will explain how I think the in-order functionality works.

11 the root node is passed to the inOrderTraverseNode, it checks to see if the left is a null, if it is not it continues passing the left node until the left node is null. When a left null node is found Then it prints the value, callback(node.key) will execute as callback(3), so the 3 will be the first item printed on the screen. The execution then continues to inOrderTraverseNode(node.right, callback), 3 don't have a right child so execution will go on and that's that.

in my mind the output would be 3 only.

How do the in-order traversal get from 3 to the 5?

The important part is to consider the entire call stack.

When you're calling inOrderTraverseNode on the root, what happens first is it calls it on its left child, and so on.

So at the point that we call it on 3, the call stack above us looks like

Eventually, the inOrderTraverseNode on the node with value 3 returns (after calling it on the null children).

At this point, the current point in code execution is at:

But now the node in question is 5, we've returned back up a level, so the stack is:

So the callback is called on 5, and now we continue execution, recursively traversing the right subtree. After that, that code returns, and eventually we have the stack:

And now we're finished with the left subtree, so we call the callback with 7.

And so on. So imagine the stack growing every time you call it on a subtree. Then you go back up, process that node, then head back down to the other subtree (growing the stack again), and processing that.

So what you're neglecting from your explanation is that after execution finishes, it goes back to the code that called it. So although it makes it down to 3, and processes fully there, that code was called from the call at 5, so it has to finish processing that call. Likewise for each further call up. This is the same process that brings you back to where you were after you call it.

Consider indorder as a command in military. Let the binary tree be the hierarchy among the soldiers.

The general shouts "inorder!" and that means, when a subordinate receives the order, he tells it to his "left" subordinates. If he has no subordinates on the left side, then he yells out his name, and only then he commands his right subordinate to execute the order.

Inorder! command means "tell your first subordinate, do it yourself, and then tell your right subordinate. Afther you are finished, report to your superior."

The general is the root of the binary tree. He shouts out "inorder!"

When all the left side is done, the general (root of the binary tree) yells out his name and gives the order to his right side. 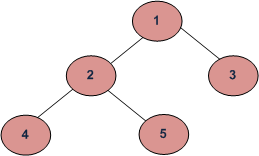 The general is 1. He shouts "inorder!"

2 recieves the order, and he shouts "inorder!"

4 receives the order. He has no left child, and thus shouts his name: 4

He has also no right child, and thus reports to 2.

Left side of 2 is done, and this 2 shouts his name: 2, and then gives the order to the right side.

This process goes on, until the root is notified a second time.

Not the answer you're looking for? Browse other questions tagged binary-trees recursion or ask your own question.