In some card games one first does a "cut" and then a riffle shuffle. The cutting point is a random value, the subsequent shuffling could be considered as deterministic. That is, only one random number is being used to generate the permutation, which understandably can't be ideal. On the other hand, theoretical perfection isn't always necessary in practice. I like hence to know whether, if one keeps the constraint of using one random number in a run, the quality of randomness of the permutation obtained couldn't eventually be improved through certain appropriate modifications of the procedure commonly employed in card games, if one is willing to take the trade-off of more work/time, inconvenience, etc. Such trade-offs may not be acceptable for real games, but I suppose there may be other practical applications that could advantageously exploit the same idea, thus without being required to acquire, e.g. via a chosen PRNG, the larger number of random numbers needed for executing the algorithm of Fisher and Yates.

Regardless of the algorithm you use, if you have $i$ bits of random data, you can generate a maximum of $2^i$ possible permutations. If $i$ is smaller than $log_2(n!)$, then there will be some permutations which cannot be produced, and you will have, in effect, decided which permutations those are when you encode your algorithm. (You may not be able to predict which permutations they are, but you have nonetheless determined that fact.) [1]

Since your permutation-generator is deterministic, you cannot invent more possibilities by manipulating the algorithm. The best you can do is to ensure that it is a homomorphism; that every random number is mapped onto a different permutation. Beyond that, you could investigate whether the one-in-4372488437452686306097090522819848184377442426979 sample of the universe of permutations exhibits any biases. For example, is each individual permutation position in the same evenly distributed? Is there a correlation between two (or more) positions? I sincerely doubt that trying to emulate a physical shuffle will improve these statistics more than the simple mathematical approach outlined below.

As xkcd reminds us, there is no such thing as an intrinsically random value. The only meaningful question we can answer is whether a sequence of pseudorandomly generated values is "random-like".

So let's first figure out how to transform the $i$ bits of randomness into $2^i$ distinct permutations. The following generic procedure should work:

(Aside from expanding the initial seed into the range $[0,n!)$, this is precisely the solution proposed by Yuval, just written out in more detail.)

Then you could start to measure the "randomness" of a proposed function $f$ by measuring the distribution of the values of each $r_i$ over the range of $f$. The next step might be to look at the distribution of $<r_i, r_j>$ for each pair $0 <= i < j < n$

One really simple definition of $f$ is:

Assuming you calculate this with precise rational arithmetic, this gives a surprisingly reasonable set of individual $r_i$ distributions for a 52-shuffle given a 64-bit random number. [2] You'll have to decide whether that's good enough for you. If it turns out to not be, there are other possible transformations which might do better. Another simple one would be replacing the above with:

where $p$ is some large prime.

[1] This information-theoretic argument is based on the permutation-generation algorithm being stateless. If each random number is in some way combined with all previously generated random numbers without losing (too much) information, then the universe of possible permutations could be much larger. (This condition is not satisfied by simply combining the two random numbers with some arithmetic or bitwise operation whose value has the same number of bits as each of the arguments.) I think that's a reasonable assumption because the original question was cast in the context of a client-server architecture; in such systems maintaining co-ordinated state between the disconnect components is generally more complicated than exchanging a few more bits in each transaction.

[2] I didn't do much more than look at some histograms and a couple of correlations and a chi-square or two, but it was all really simple python, so I'm sure you could reproduce my limited research in a few minutes.

There is a method by Ivan Stojmenovic, which uses only a single (pseudo-)random number in $[0,1]$ to uniformly (unbiasedly) generate any random permutation needed.

Following the work by Stojmenovic 38, "ON RANDOM AND ADAPTIVE PARALLEL GENERATION OF COMBINATORIAL OBJECTS", this section describes functions mapping the interval [0...1) into the set of combinatorial objects of certain kind, for example, permutations, combinations, binary and t-ary trees, subsets, variations, combinations with repetitions, permutations of combinations, and compositions of integers. These mappings can be used for generating these objects at random, with equal probability of each object to be chosen. The novelty of the technique is that it avoids the use of very large integers and applies the random number generator only once. The advantage of the method is that it can be applied for both random object generation and dividing all objects into desirable sized groups.

The method works similarly to picking a random index from $[0,n!-1]$ and unranking the corresponding permutation (or other combinatorial object of interest), but with a twist. With appropriate manipulation of combinatorial relations one can use simply a random number (essentialy a probability that a specific permutation has been selected, uniformly) and do all computations using float-point arithmetic without ever using big integer arithmetic. This also leads to using one single random number, so it leads to a kind of fisher-yates-knuth shuffle algorithm with minimum number of PRNGs used, one. 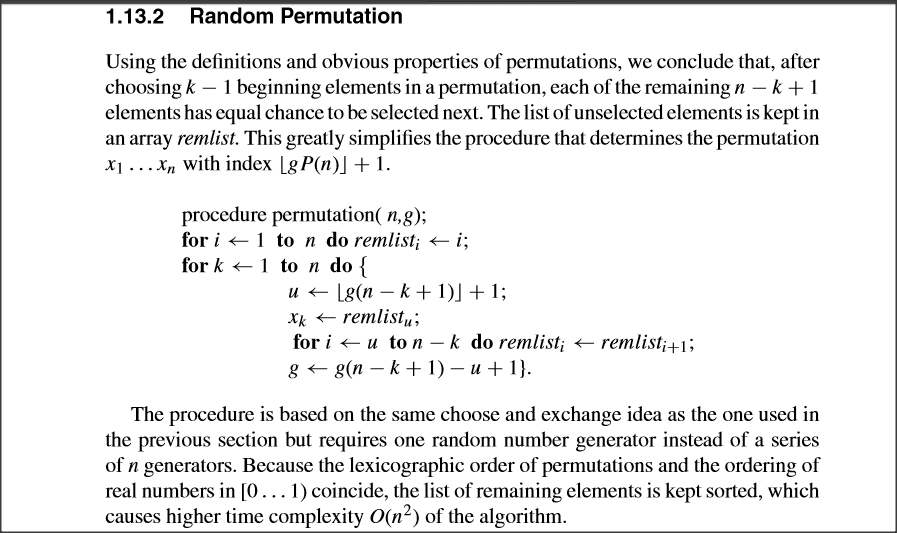 The drawbacks of this approach are related to floating-point calculations and their accuracy, although the performance cited is decent and in accord with other approaches (that have similar issues, e.g using multiple PRNG's which after a while do not meet uniformity criteria depending on number of items $n$ in permutation, and so on..).

[..]The method gives theoretically correct result. However, in practice the random number $g$ and intermediate values of $p$ are all truncated. This may result in computational imprecision for larger values of $m$ or $n$. The instance of a combinatorial object obtained by a computer implementation of above procedure may differ from the theoretically expected one. However, the same problem is present with other known methods (as noted in the previous section) and thus this method is comparable with others in that sense. Next, in applications, randomness is practically preserved despite computational errors.

(ps similar fast and efficient methods are extensively researched and used for my custom combinatorial library for node/JS Abacus, in progress)

Not the answer you're looking for? Browse other questions tagged randomness sampling permutations or ask your own question.

25
How to prove correctness of a shuffle algorithm?
23
Is rejection sampling the only way to get a truly uniform distribution of random numbers?
33
How asymptotically bad is naive shuffling?
5
Is there a random shuffle algorithm using only true /false?
3
Extracting Randomness from Mouse Acceleration
1
Achieving Randomness
2
Indexing a random permutation
1
number of queries to recover the permutation
2
How to determine seed collision probability in a PRNG?
0
Randomize List with guaranteed Index Change