From reading (1) below, it seems they have implemented an abstraction layer on top of the code that does what the code already does to some degree. They built an Expression class for symbolic integer manipulation, and they replace any native integer calls with these in their symbolic execution.

Wondering what it takes to do symbolic execution, at a high level. Not sure if you need to create your own entire abstraction on top of every type of object in the language, or what needs to happen. I'm not quite following the paper, but then in (2) it seems they do some more abstraction. There's not much else in terms of description there. Another paper in (3) says to create symbolic expressions as well. But at some point it seems like you are going to end up recreating the whole program, like a Virtual Machine sort of thing, which at that point it seems like you might as well run the original source code. Not sure what I'm missing in this interpretation.

In (4) they describe some more. They mention a symbolic path constraint PC, a first order quantifier free formula over symbolic expressions. Wondering how exactly this accumulates constraints. This seems like the core of it. Not much more is said there though.

Conceptually, the instrumentation proceeds in two steps. First, the integer fields and operations are instrumented. The declared type of integer fields of input objects is changed to Expression, which is a library class we provide to support manipulation of symbolic integer expressions. A type analysis is used to determine which integer variables have their declared types changed to Expression. Operations involving these variables are replaced with method calls that implement “equivalent” operations that manipulate objects of type Expression.

(3) The key idea behind symbolic execution [35] is to use as input values symbolic values instead of actual data, and to represent values of program variables as symbolic expressions.

(4) Symbolic execution maintains a symbolic state, which maps variables to symbolic expressions, and a symbolic path constraint PC, a first order quantifier free formula over symbolic expressions. PC accumulates constraints on the inputs that trigger the execution to follow the associated path. At every conditional statement if (e) S1 else S2, PC is updated with conditions on the inputs to choose between alternative paths. A fresh path condition PC' is created and initialized to PC ∧ ¬σ(e) (“else” branch) and PC is updated to PC ∧ σ(e) (“then” branch), where σ(e) denotes the symbolic predicate obtained by evaluating e in symbolic state σ. Note that unlike in concrete execution, both branches can be taken, resulting in two execution paths. If any of PC or PC0 becomes un-satisfiable, symbolic execution terminates along the corresponding path. Satisfiability is checked with a constraint solver. 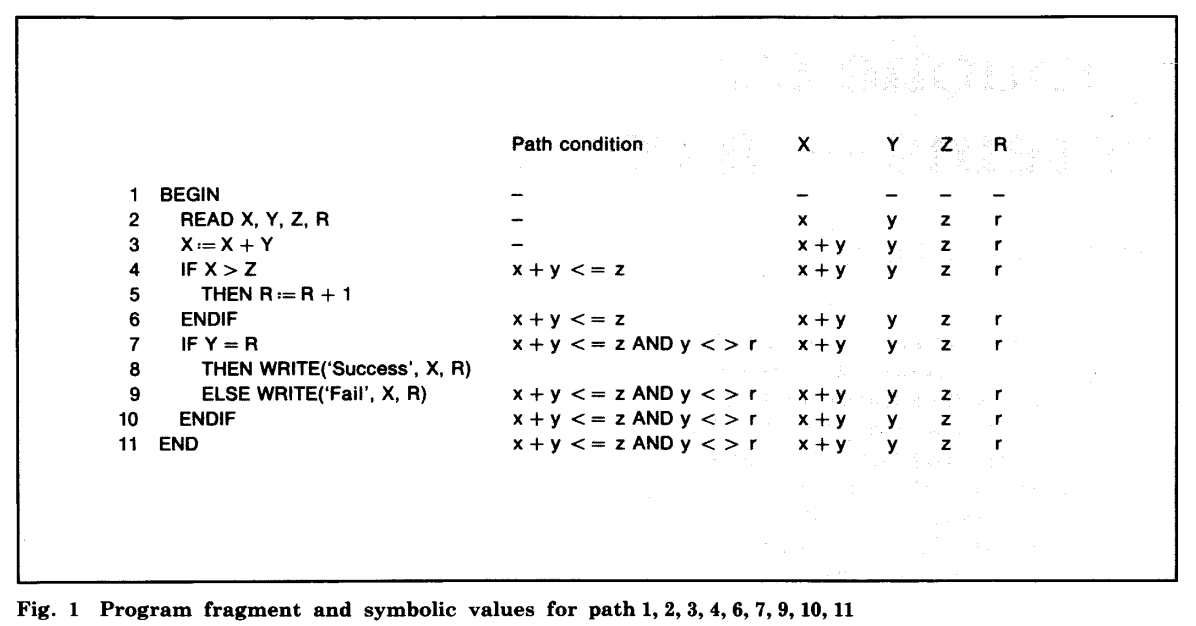 When you say "But at some point it seems like you are going to end up recreating the whole program, like a Virtual Machine sort of thing" --> you are right. Symbolic execution does indeed try to recreate all the paths of the program (as much as the resources allow). However, this: " ... it seems like you might as well run the original source code." is not correct. When you run an actual program, only one control flow path is executed and it can very well give you an idea of the things happening or any bugs occurring in that control flow path of the program, but you do not know anything about the rest of the program. What if some rare input drives the program along with a path which is buggy? Your testing process will never be able to find it out if all you have is regular, non-rare input driven tests. What symbolic execution does is that it tracks all the paths of the code that are feasible (executable). A SE tool will fork two states of the program whenever it comes across a conditional construct, one with a 'true' branch and another with a 'false' branch. So, visualize it as a tree where every node is a conditional juncture from where a concrete execution will choose a single path from the multiple paths that may emanate from that node. The symbolic execution tool, however, will keep track of all the options by forming different path conditions along the respective paths. To check the feasibility of a path, the tool presents the path constraints collected so far to a constraint solver.

To answer your questions:

7
Simulate the concatenation of two log-space programs in log-space
21
Algorithm to test whether a language is context-free
11
Algorithm to test whether a language is regular
1
How does the Vertex Cover algorithm by Chen et al find its tuples?
3
How to solve the feasibility problem in 0-1 integer programs?
4
Discrete assignment problem with penalties
4
Looking for an algorithm to find a shortest path in a special graph
2
What is the best algorithm to find the optimal path in reducing company's real-estate footprint?