I'm a bit confused about the definition of the Minimum Cost Flow problem, in terms of the edge cost (or weight) values.

I don't remember a integral requirement on the cost/weight values for the edges when first learning the problem. But when I start to look for implementations, most algorithmic code I found require the edge weights to be integers. (I haven't delved into Simplex or LP related code though). For example, in here, and here, weight values are defined as int cost; and typedef long long int price_t; ... price_t _cost; // cost of arc;, resp.

Boost Graph Library (BGL) seems to allow different weight types through C++ templates, but the examples in documentation are using integer weight values. The only use of floating weight values I can find is a SO question about the errors associated with using the floating points (https://stackoverflow.com/questions/35746487/). Google optimization tool also has a bug/feature request for floating point weight values, which is closed immediately stating it only supports int64, currently.

Is there a fundamental reason behind this lack of real valued weights in mincost flow implementations (such as complexity)? That is, is the real valued Min Cost Flow more difficult or impossible to solve, or is this just a coincidence?

In the case of the Ford-Fulkerson algorithm, yes, it's due to complexity. When the edge weights/capacities aren't integers, things get really annoying, really fast.

If you allow all real numbers, you can end up with an instance that doesn't terminate. Normally, you augment paths until you can no longer do so. An irrational capacity value could allow the algorithm to continually find smaller and smaller augmenting paths.

Uri Zwick came up with a good example to show this: 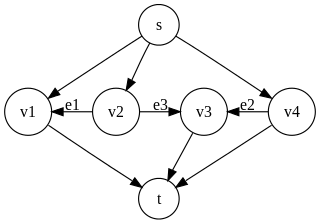 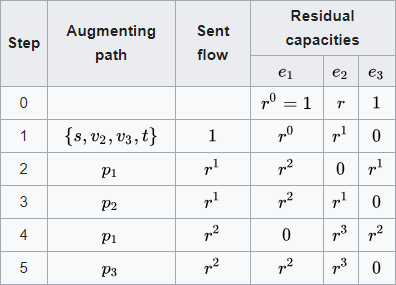 The Stoer-Wagner algorithm will work with non-integer capacities, and so will Simplex/LP algorithms.

Not the answer you're looking for? Browse other questions tagged network-flow or ask your own question.