Assume a dataset with two entities , Users and Foods. A user can have a relationship with a Food, specifically they can score it from 0 to 100.

What i'd like to achieve is, for every user, find all the other users that are similar to them. By similar i mean find the Users that have also liked similar Foods and get a match so essentially im trying to build a a matchmaking system.

Algorithms such as finding friend's of friends are relatively easy to wrap my head around however im unsure as to how to approach this one and wether describing my data as a graph is even the right way to go about it.

I originally made a thought experiment to see how this would look on a relational database and its clearly quite hard to achieve as for every insert of a new Food or User, recalibration would need to happen for the entire database ( which sounds unavoidable in the first place )

I dont know what i dont know so if you could give me some pointers from here i'd be happy to follow your leads. Thanks so much.

Yuval Filmus already pointed you towards recommender systems, which in your case is the right way to go.

However, since you asked for a graph formulation and tagged it with graph-theory, we will go out of our way to put this into such a setting.

A graph is called bipartite if its vertices can be partitioned into two sets, say $U$ and $V$ in such a way that all edges are between $U$ and $V$. (Coincidentally a graph is bipartite if and only if it is two-colorable.) 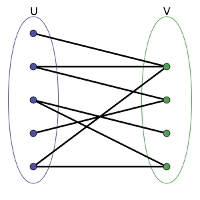 An editing problem is a graph problem where we want to add or delete (as few as possible) edges to make a graph have a certain property. So let us define Bicluster Editing as the following problem:

Now, what does this mean? If such a set exists for a small $k$, you have partitioned your users and foods into equivalence classes such that in every equivalence class, all the users like the same foods and all the foods are liked by the same users, changing the graph very little.

Is it practical? No. But at least it's NP-complete.