How to find MST for each source

Let's say I have a map with factories and selling points. I want to trace the paths from factories to the selling points with the lower possible cost. The image bellow is an example of a possible solution for that map, then the output of the algorithm should be two trees with the edges of those trees. 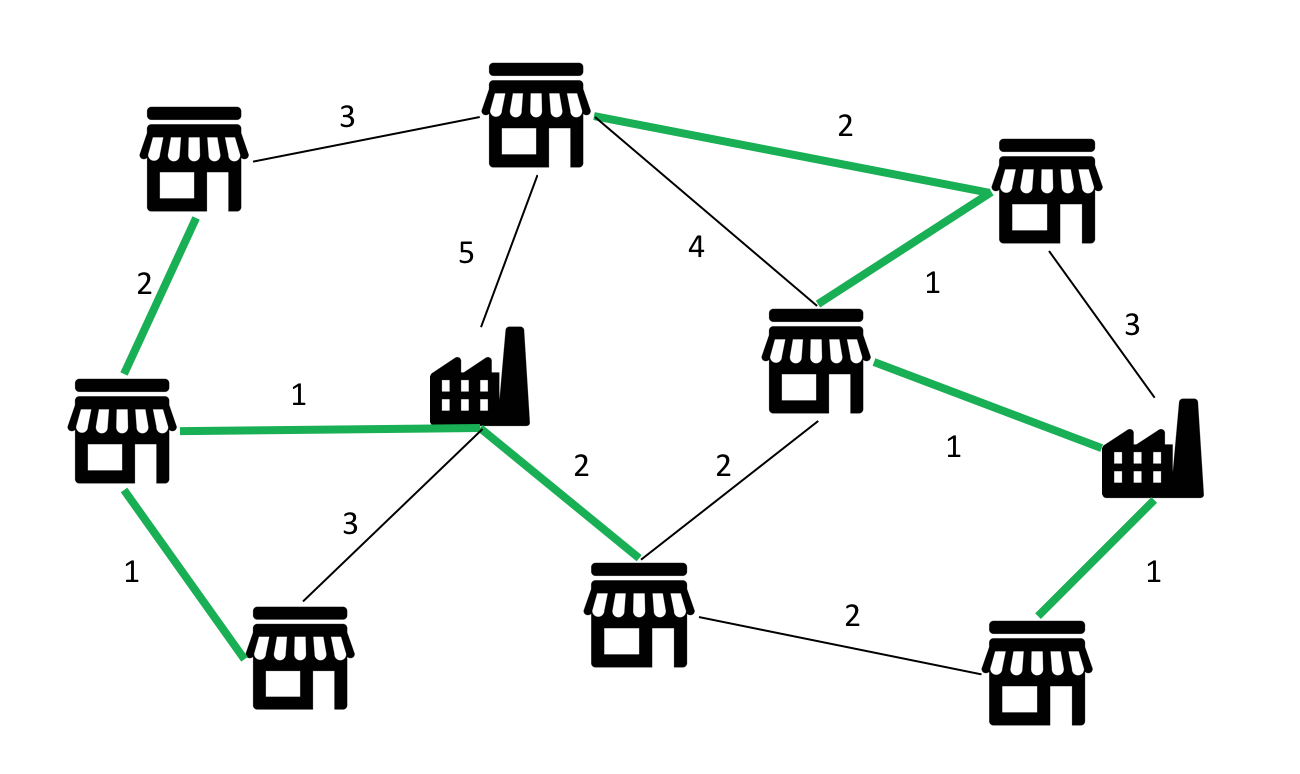 If there is only one factory a possible solution would be using Kruskal's algorithm to find the MST with this factory as source.

¿Is there any algorithm to do so? ¿How would a modification of Kruskal's work?

[EDIT] I need to find the minimum cost tree from factories to shops but given that there is more than one factory may have unconnected trees as optimal solution.

[EDIT 2] If an edge is used twice that cost counts only once.

Here is a slight modification of Kruskal's algorithm which can solve this.

Sort all edges by non-decreasing weight. Maintain a disjoint set union to track which vertices are connected, as usual. Consider the edges one by one in the resulting order. If an edge connects two vertices which are already connected, we drop it, as usual.

The difference is as follows: if an edge connects two components such that each already contains a factory, such edge would contribute nothing to our network, so we also drop it.

If an edge connects two components, and at least one of them does not contain a factory, we take the edge and update the disjoint set union, as usual.

Another view with the same result is as follows. Make an auxiliary vertex, the super-factory. Add an edge of weight 0 from the super-factory to each of the real factories. Run Kruskal algorithm on this new graph.

First thing, it will take all our added edges with weight 0. If the original graph also had such edges, let the algorithm start with our newly added edges. We can do it since the total cost does not depend on the ordering of same-weight edges.

Not the answer you're looking for? Browse other questions tagged algorithms graphs shortest-path spanning-trees or ask your own question.

4
Find a MST such that it's mostly red (original graph's edges are colored red and blue)
2
Connecting an unconnected forest of subtrees in a graph?
3
Is the Nearest Neighbor Algorithm a valid algorithm to find a Minimum Spanning Tree?
1
Algorithm - Checking if an unconnected graph is cyclical
13
Are all MST minimum spanning trees reachable by Kruskal and Prim?
1
How to find the smallest of the maximum edges of all paths between two nodes in a graph