How the Abstract DPLL Algorithm Works in SAT Solving

I have come across many definitions of the DPLL algorithm but haven't been able to follow them. The ones that are closest to making sense to me are the ones based on state-transition systems with transition rules such as defined here: 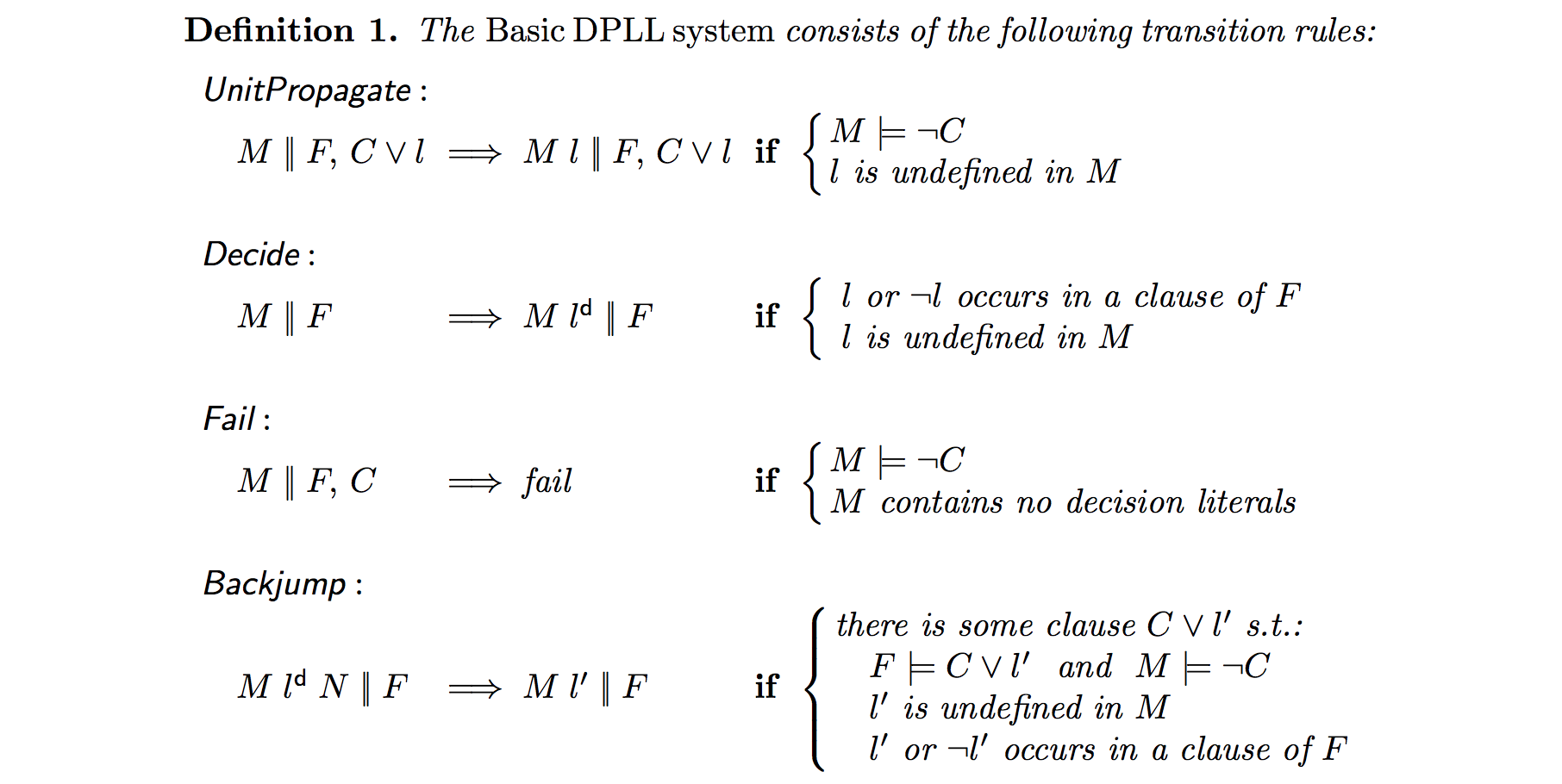 Here, a DPLL procedure will be modeled by a transition system: a set of states together with a relation, called the transition relation, over these states. States will be denoted by (possibly subscripted) $S$.... A state is either fail or a pair $M \parallel F$, where $F$ is a finite set of clauses and $M$ is a sequence of annotated literals.... We will not go into a complete formalization of annotated literals; it suffices to know that some literals $l$ will be annotated as being decision literals; this fact will be denoted here by writing $l^d$ (roughly, decision literals are the ones that have been added to $M$ by the Decide rule given below). Most of the time the sequence $M$ will be simply seen as a set of literals, denoting an assignment, i.e., ignoring both the annotations and the fact that $M$ is a sequence and not a set.

Two examples are as follows.

This is as much as I can gather. This:

Is essentially an implementation of this:

So each of the blocks between the commas or $\land$ are clauses. On the left is a growing list of literals (atoms or their negation). On the right are the rules being applied (like Decide). But I don't understand (a) how the rules are being applied / why they are chosen at the time they are chosen, (b) how it results in an annotated literal for $M$ on the left, and (c) why some of them are marked in bold as the "decision" literals.

The final result, from my understanding, is the model $M$ (on the left) that satisfies the formula $F$ on the right. Essentially, it's a valuation.

Wondering if one could clarify how the first example works, how the annotated literals get added to the model $M$ on the left.

Describing DPLL as a series of state-transition rules is the worst way I've ever seen to aid understanding the algorithm. The pseudocode provided in the WIkipedia article on DPLL is much easier to understand if you're approaching the algorithm for the first time.

Decision literals are the literals returned by the choose-literal function called above. Annotated literals are just literals that are members of M that are marked in some way so the DPLL implementation can distinguish decision literals from literals added to M by unit propagation. This marking is for the sake of the backjumping code which must unroll assignments until the one responsible for the current conflict is found and then replace it.

Note that the original DPLL algorithm did not have backjumping in it. It simply backtracked, either reversing the current assignment or returning false if the algorithm had run out of assignments to try. Backjumping was a later innovation.

Note also that pure literal assignment isn't usually done in modern SAT solvers that implement some form of DPLL. It is a fairly expensive check to do in an algorithm expected to recurse and backtrack an exponential number of times and the benefits of doing the check don't outweigh the costs.

Not the answer you're looking for? Browse other questions tagged satisfiability sat-solvers or ask your own question.

1
Fast Consequence FInders
6
Why don't modern SAT solvers use the notion of a "watched clause", in the same way they use the notion of a "watched literal"?
7
Why is pure literal elimination absent in DPLL-based algorithms like Chaff?
7
Is #HORNSAT polynomial?
1
monotone min-3-sat polynomial algorithm?
1
Is it an open problem if generalized resolution is always possible?
3
Clarification on "clause learning" in DPLL algorithm
10
What is wrong with this simple proof of P=NP?
2
Proving satisfiability using resolution and variable elimination