Is my interpretation correct?

I am trying to implement the algorithm described in the paper A quantum-inspired classical algorithm for recommendation systems.

This is the algorithm: 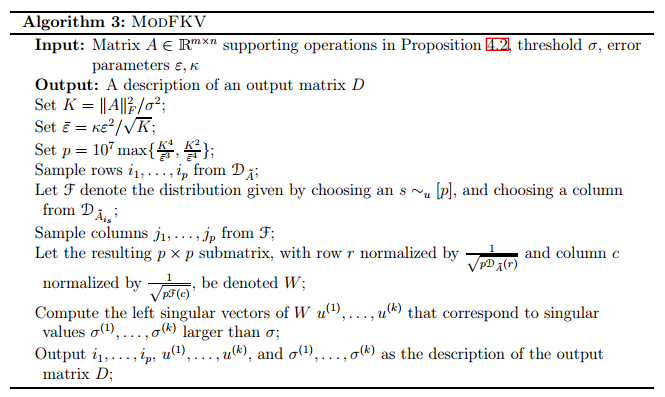 These are the necessary definitions for mathematical notations used in the algorithm to understand the algorithm.

For your second question, $\mathcal{D}_x$ is a distribution on column indices. You don't choose a column directly – you only choose an index. This corresponds to 1,3 in the example above.

Not the answer you're looking for? Browse other questions tagged algorithms complexity-theory quantum-computing or ask your own question.

1
What is Unique Coverage Problem?
1
Implement multi-fragment heuristics for the traveling salesman problem
3
Interpretation of co-NPCompleteness?
3
How is this definition of the quantum Fourier transform to be understood?
2
Question on an Algorithm for Longest Increasing Subsequence
1
Approximate max weight path in directed graph
2
What is the computer science interpretation of a qubit?