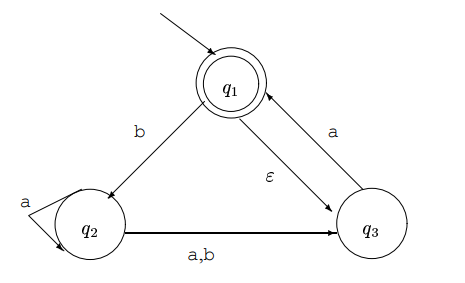 I read on another post about $\epsilon$ being at two states at the same time, but couldn't get it. What exactly is happening when $\epsilon$ is entered and when $a$ is entered (two different strings)?

I think the above is the correct tree when $\epsilon$ is inputed, but makes no sense to me.

Note that a word is accepted in a NFA if there exists a path from the initial state to an accepting state labelled by the symbols of this words. if should be rejected if no such a path exists.

When $a$ is entered then the possible path is move to $q_3$ without consuming anything and then consume $a$. This lead to the accepting state $q_1$.

In a non-deterministic automata, $\varepsilon$-transitions make sense. These do not read any letter, but rather can be taken "for free" at any time. Thing of strings of length $0$ being optionally present between any two letters.

Now if the automaton receives input "a", it can immediately go from $q_1$ to $q_3$ - reading the empty string at the beginning. Only then it reads $a$, and moves back to $q_1$, and thus accepts.

Of course it could have attempted to read $a$ at the beginning and died, but since a non-deterministic automaton accepts if it can somehow reach an accepting state, this does not matter.

0
Why isn't converting from an NFA to a DFA working?
9
Is non-determinism in a non-deterministic turing machine different from that of finite automata and push down automata?
2
NFA-epsilon: epsilon loops, and how do I deal with them?
5
Understanding definition of epsilon closure and finite automata states
2
The order of ε-transitions in NFA
4
Black Box Decision problem for NFA
1
$\epsilon$-transitions in NFAs
1
Converting this NFA-e to DFA