I was solving a problem, where they asked which of the given options give equation for the difference of full subtractor. The circuit in the solution option was:

For me the first line:

looked more like $x\odot y\odot z$. But I know the difference of full subtractor is $x\oplus y\oplus z$. So I tried to evaluate both separately:

To my eyes, both equations $(I)$ and $(II)$ looks the same. So I went to wolframalpha and prepared truth table for both of them. 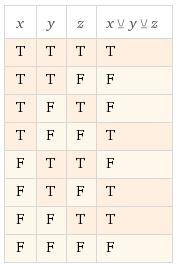 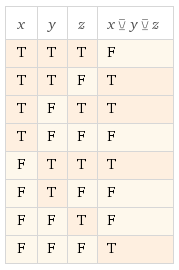 And they correctly look complement of each other. Then why the given answer and my calculations equates $x\odot y\odot z$ with $x\oplus y\oplus z$? What stupidity I am doing here?

Now let us come to the real question. Why does wolfram alpha give a completely different output for $x\odot y\odot z$ at http://www.wolframalpha.com/input/?i=x+xnor+y+xnor+z?

As Peter Taylor has noticed on that web page, Wolfram parses "x xnor y xnor z" very differently from what we might have expected, "(x xnor y) xnor z". Wolfram parses it as "Not(x Xor y Xor z)" in text notation or, what is the same, "¬($x \underline\vee y\underline\vee z)$" in symbolic notation. This is not mentioned in its documentation for Xnor operator at http://mathworld.wolfram.com/XNOR.html nor at http://www.wolframalpha.com/input/?i=xnor. One might suspect this is an implementation bug of Wolfram.

However, it turns out this is a feature by design (or possibly an unintentional side-effect) of Wolfram. Its documentation for Operator Input Forms shows the following lines, where the small wedges at the end of each line means "built-in meaning exist".

So after all Wolfram has decided to treat "x xnor y xnor z" as "not(xor(x,y,z))" instead of the more common "(x xnor y) xnor z" as a surprise to unsuspecting users such as OP and me! (Of course, "more common" is only in the eyes of some people. It is quite possible Wolfram's interpretation is more common in other situations.)

One might wonder why Wolfram has made such a strange and uncommon choice. Here is my speculation, my pure shallow speculation.

Wolfram defines Xor for multiple argument as "true if an odd number of its arguments are true and false otherwise", probably along the approach of a BooleanCountingFunction. It also parses and evaluates expressions such as "x1 xor x2 xor x3 xor x4 xor x5" (which everyone agree must be "((((x1 xor x2) xor x3) xor x4) xor x5)") as "Xor(x1, x2, x3, x4, x5)", which is easier to define and faster to compute especially when the number of arguments becomes larger. All is going well without inconsistency for Xnor. Xnor looks very similar to Xor. So, (again just my speculation), Wolfram chooses to define Xnor in a similar way to Xor ( and in fact, in a similar way to Or, And, too). Since BooleanCountingFunction only deals with the number of true values, it choose to to define and compute both Xnor(x1,x2,...,xn) and "x1 xnor x2 xnor ... xnor xn" as whether the number of the true values are even, which is also the negation of Xor and which is, at least indeed, the same as x1$\odot$x2 in the case when $n=2$. However, the resulting value of, for example, "x1 xnor x2 xnor x3" as computed by the negation of Xor(x1,x2,x3) is exactly the opposite of the value of "(x1 xnor x2) xnor x3"! In fact, Wolfram's value of "x1 xnor ... xnor xn" and our value of x1$\odot\cdots\odot$xn are the same when n is even and different when n is odd, for any truthy value of x1, ... and xn.

In conclusion, be careful when you use Wolfram to compute logic formula involving XNOR and NAND, especially if you have more than one such operator or more than three arguments. You will want to double check.

The discrepancy is that Wolfram Alpha's interpretation of x xnor y xnor z is not the same as yours. Compare x xnor y xnor z with (x xnor y) xnor z, looking both at the truth tables and at the logic gate. You consider them to be equivalent, but WA is parsing x xnor y xnor z as a single three-input gate not(xor(x, y, z)), and it parses x xor y xor z as xor(x, y, z), so naturally the outputs are inverted.

Not the answer you're looking for? Browse other questions tagged boolean-algebra or ask your own question.