My approach to the problem has been to reformulate it into something more recognizable, but I don't know the best way to solve the reformulated problems either. I list the original problem, an example, and two reformulations below. The second reformulation is equivalent to an unbalanced assignment problem with a binary cost matrix.

I have two star multigraphs: A small pattern, and a large target. The graphs may have multiple edges between a single pair of nodes. The edges of each graph have labels from some small set of labels. I am looking for the most efficient algorithm to check if there exists a subgraph of the target which is isomorphic to the pattern. 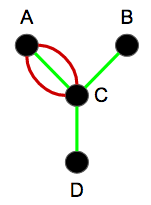 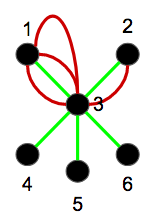 where edge colors represent labels. There is a subgraph of the target consisting of the nodes 1, 2, 3, and 5 (and some edges that I haven't given names) which is isomorphic to the pattern graph. Note that the subgraph need not be a node-induced subgraph, and is not in this case.

Enumerate the neighbors of the center of each graph: $1, 2, \dots n_{\mathrm{pattern}}$ and $1, 2, \dots n_{\mathrm{target}}$. Define $A_{i,j}=1$ if node $i$ in the target has at least as many edges of each type to the target's center as node $j$ in the pattern has to the pattern's center. If the constraint is not met, then $A_{i,j}=0$. The problem becomes: Given a binary matrix $\mathbf{A}$ with more rows than columns, does there exist a permutation of the rows such that the main diagonal is all ones?

You are given $n_{\mathrm{target}}$ workers to perform $n_{\mathrm{pattern}}$ tasks, where each worker is competent in only a subset of the tasks. Does there exist an assignment of workers to tasks such that each task has at least one competent worker assigned?

After you fix the star centers, your problem is simply bipartite matching.

Not the answer you're looking for? Browse other questions tagged algorithms graphs search-algorithms constraint-satisfaction or ask your own question.

1
Algorithm to find a subgraph such that all of its edges has an anti edge
2
Automorphism of a Graph with a given Set of Permutations
3
What equivalence relation does this algorithm produce for an cyclic directed graph with labeled edges?
0
Maximize vertex cover weights with bounded edge weights in a connected subgraph
4
Is this problem that's similar to integer linear programming also an NP-complete problem?