What is the best way to merge cycles to minimise total weight?

Naively I want to merge all the cycles in $S$ into a single cycle with the smallest total weight. I also want to somehow preserve most of the edges of the original cycles. I am not looking for an optimal solution, just an efficient heuristic.

Although the above procedure works in giving me a single cycle, it rarely gives me a cycle with a small weight. I can enhance this procedure by merging 3 cycles at once in a move similar to 3opt, but then I have to perform significantly more computations.

So here are my questions:

Attached are some examples. In the left figure a 3opt move is optimal, while in the right figure a sequence of 2opt moves is best. 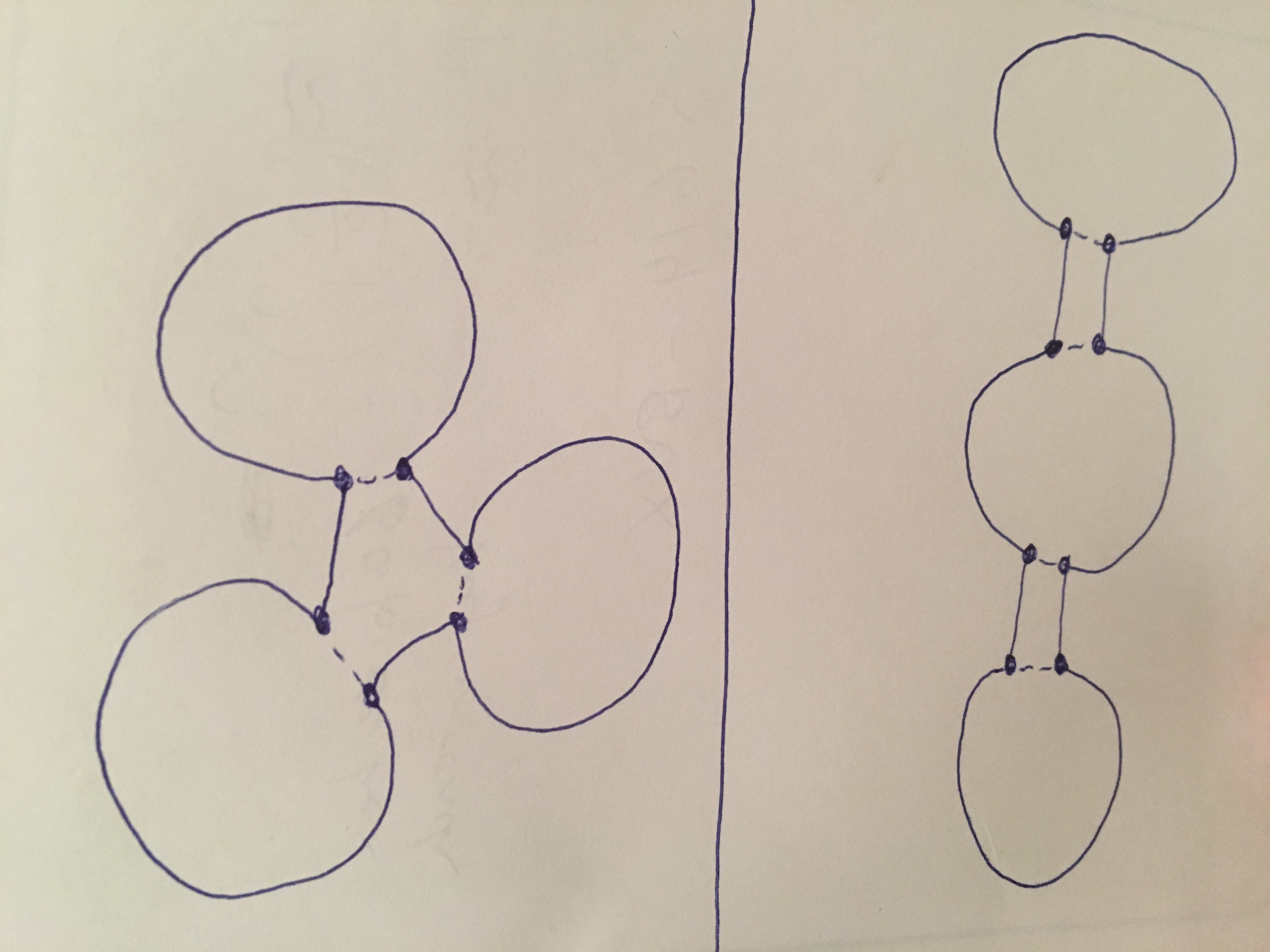 Here is a numeric example that I constructed. Using the optimal merging method we get a weight of 43, while the greedy algorithm gives us a worse solution of weight 50. Even if we join the bottom cycle by removing the new edge we added (weight 10) we would still get a worse solution (I didn't draw it for clarity).

This is NOT an answer. This post is just to construct a concrete numeric example out of the left diagram in the picture in the question.

(This answer, too long to fit as a comment, was requested by a user who wanted to see a concrete numeric example which his greedy algorithm may fail. It was written about the same time when OP added a numeric example that is exactly the same except a slightly different weight assignment.)

Let $S$ be the set of the following three simple circles.

We are allowed to merge two cycles by removing an edge from each cycle and connecting them up with two new edges, repeatedly until we reach a single cycle. The goal is to reach a cycle with the smallest total weight.

A description of an optimal solution for $S$.

A description of greedy algorithm on $S$ that considers all pairs of two existing cycles at a time.

Conclusion: A simple greedy algorithm does not guarantee the desired smallest weight.

I have also constructed a planar graph out of that left diagram. However, it is much more messier to describe the construction and to show the algorithms and their results.

Furthemore, it is not hard to construct an example where the greedy algorithm that considers all triples of existing cycles at a time will not reach the smallest weight. I believe, with a bit of more work, we can show a greedy algorithm that considers all combinations of a fix number of existing cycles does not guarantee the desired smallest weight.

It is quite possible this problem does not have a polynomial solution that always yields the smallest weight. In fact, it looks like this concern is implied by the OP since the question asks for "an efficient heuristic that produces a cycle of small weight".

Not the answer you're looking for? Browse other questions tagged graphs minimum-spanning-tree hamiltonian-circuit or ask your own question.

4
Decide whether there exists a walk of weight exactly k
5
Heuristic for weighted maximum independent set in graph with ~$2 \times 10^5$ nodes and $|E| \propto |V|$
2
Proof for variation of Prim's and Kruskal's to find maximum-weight acyclic subgraph
1
Finding missing edge weights in the context of minimum spanning tree
0
Find longest path in graph with N nodes and N edges
4
Approximating the biggest acyclic subgraph of a given weighted digraph $G= (V,E)$
0
Efficient algorithm for assigning weights to nodes in graph to create steady state flow