Wikipedia page says, that when choosing a pivot element one can use both hi and lo indexes. However, when implementing the same code in Python, my code fails in a very specific circumstances. My python code is a translation of the pseudo-code from Wikipedia.

This particular code works for many-many test-cases generated at random. However if I put pivot = A[hi] in partitioning, sometimes it fails. Specifically, when the last element(i.e. pviot) appears to be the largest in the array at hand. In that case i appears to be equal the length of the array and everything goes to the infinite recursion.

Furthermore, in Introduction to Algorithms by Cormen et al., we see the following pseudo-code for the same partitioning: 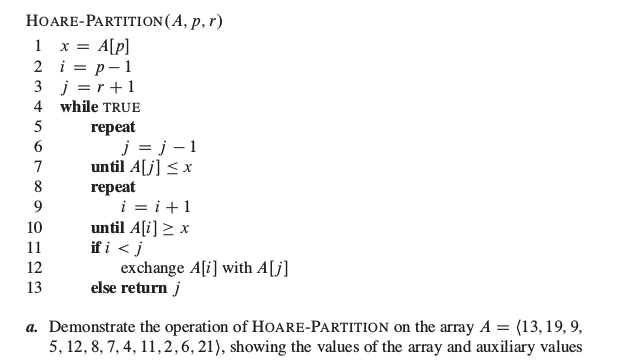 This piece of code seems to be identical to the one from Wikipedia. Moreover, seems like the code would fail on their example. Because I understand this very unlikely to be the case for them to make this mistake, I'm wrong somewhere.

So my questions are:

"The devil is in the details". Algorithms and programming, fortunately and unfortunately, needs the greatest attention to detail.

The above version, as in OP's post and as in Wikipedia, is correct.

However, as mentioned by OP, the above version with its middle line of code changed to pivot = A[hi] will run into an infinite loop if given an array of more than one element whose unique largest element is its last element. A simple example of such an array is $[0,1]$ or $[1,0,2]$.

When the Wikipedia page says "there are many variants of this algorithm, for example, selecting pivot from A[hi] instead of A[lo]", it means the following variant. On first look, nobody would expect this change of pivot would require code at two other places be changed. However, it is natural from the point of symmetry. The above version is NOT symmetric with respect to lo and hi. In fact, since only one splitting index is returned when two indices iand j crosses, there is no way to be symmetric! The only way to restore symmetry is creating a mirroring variant like below.

The posted code as in problem 7.1 of CLRS's Introduction To Algorithms, third edition is correct, too, since it is the same as your code and the code in Wikipedia. In particular, it works correctly on their example, $[13, 19, 9, 5, 12, 8, 7, 4, 11, 2, 6, 21]$. I suspect that you missed the part e of that problem, "Rewrite the QUICKSORT procedure to use HOARE-PARTITION". The expected result of the rewrite will be a procedure that is just like your Python function quick_sort_hoare . In fact, that problem is written in great detail in order to prove its correctness. I would like to encourage you to go over that problem closely.

Not the answer you're looking for? Browse other questions tagged sorting quicksort or ask your own question.

1
In this implementation of Hoare-partitioning Quicksort, why are additional checks for $i \leq j$ needed?

3
What happened if we implement quicksort without tail recursion?
3
How does Hoare's quicksort work, even if the final position of the pivot after partition() is not what its position is in the sorted array?
0
Question regarding Hoare's partitioning scheme and a slight modification to it
1
In this implementation of Hoare-partitioning Quicksort, why are additional checks for $i \leq j$ needed?
6
Implementation of QuickSort to handle duplicates
2
Hoare partition scheme may cause infinite recursion