I'm trying to develop an Algorithm for Polygon Intersection. Where each polygon is an array of Points, where each Point has X and Y properties.

Algorithm limitations:
- Algorithm input: 2 Polygons.
- Algorithm output: Intersection Polygon.
- Polygons may be convex or concave (angle between 2 neighbor edges my be more than 180).
- Polygons will not have any holes and will not be self intersection polygons.

I managed to develop this algorithm this far (given 2 polygons A and B):

In debug I see that the Intersection area is built from vertexes combined groupA, groupB and groupI. But I don't know how should I merged them together - how to order/sort them???

I have try to sort the clockwise around the center point of the new intersection polygon - but this will only work for convex polygons not for concave. 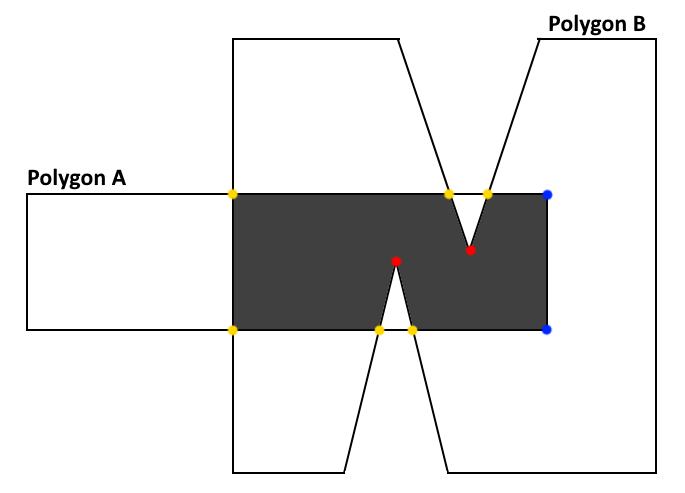 Note that in general the intersection of non-convex polygons may consist of multiple disconnected regions. The procedure above will only give you one of these regions.

Step 1:
Create Array: A+ by: merge PolygonA with GroupI:
1.1 Loop over the edges of PolygonA (each 2 neighbor points creating an edge - also the first and the last).
1.2 For each edge create a line equation: "y = mx + b" (given 2 points)
1.3 Collect all the point of GroupI that are placed on the line created at "1.2"
1.4 Sort the collected points by distance from the edge start point.
1.5 Add the sorted collection to PolygonA after the edge start point.
2. Return the new PolygonA as a new array: A+

Step 2:
Repeat step1 but create B+ form PolygonB with groupI.

Step 3:
Create Array A* by removing points from A+ that not exist of GroupA

Step 4:
Create Array B* by removing points from B+ that not exist of GroupB 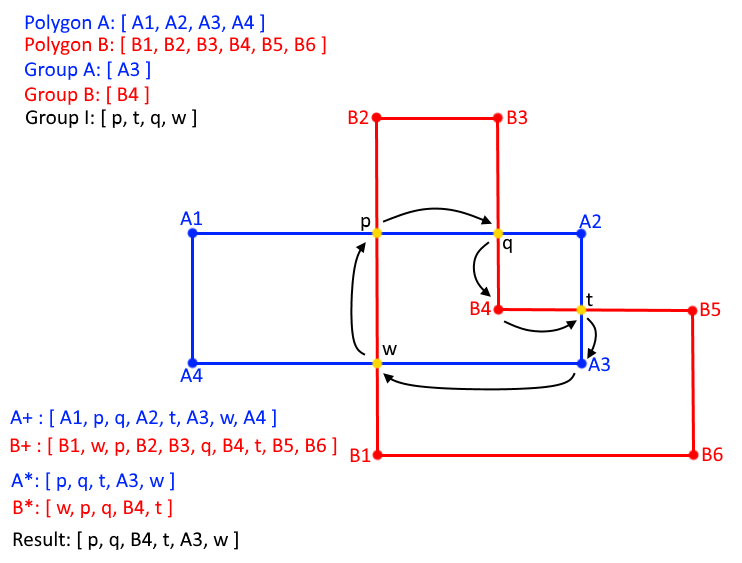 2
Point Location Problem in Polygon in Repetitive Mode for a Simple Polygon
4
An algorithm for fitting a rectangle inside a polygon
3
Divide self-intersecting polygon into simple polygons
5
Reduction from Vertex Cover to Polygon Cover
1
Given a set of irregular polygons finding a set of vertices (one on each polygon) such that distance between points is maximized
4
Repeated point in polygon: preprocessing complexity given logarithmic query time?
4
An algorithm to find the area of intersection between a convex polygon and a 3D polyhedron?