In this implementation of Hoare-partitioning Quicksort, why are additional checks for $i \leq j$ needed?

I am looking at the following implementation of Quicksort that uses Hoare partition scheme (two approaching indices $i$ and $j$ starting from either end of the array).

What I've found out so far:

I don't expect a complete answer but I would be very thankful if someone could point me in the right direction. 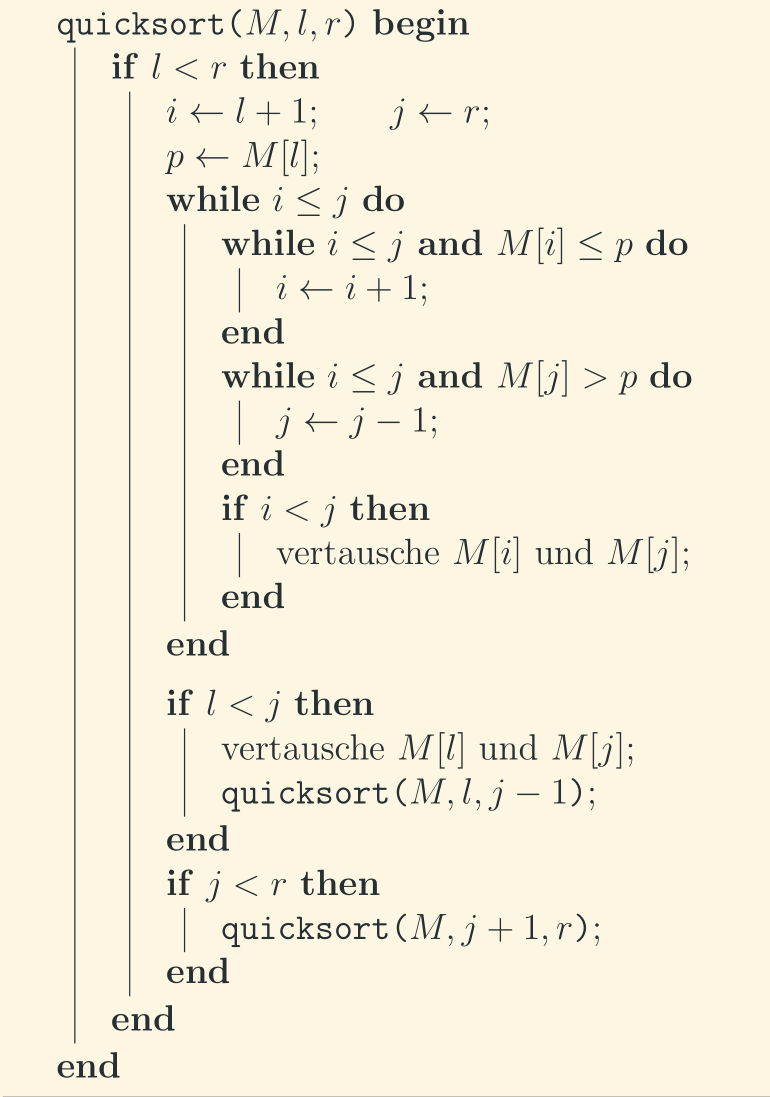 I am having trouble seeing why in the inner while-loops, the condition $i\le j$ is needed in addition to checking $M[i]\le p$ (or $M[i]\gt p$). The pseudocode given in the Wikipedia article does not seem to do this additional check. There is a potential problem in the given implementation that if all elements in $M[l+1..r]$ are less than $p$, the first while loop would not terminate when not checking for $i≤j$. However, that does not explain the necessity of checking $i≤j$ in the second inner while loop.

As you suspected, it is not needed to check the condition $i≤j$ in the second inner while loop.

One usual way to prove that condition is not needed is by analyzing all possible cases and establishing various invariants as well as employing the powerful tool of mathematical induction, which will probably convince anyone who can follow through the proof with enough patience. Although I have done that below, it is actually not convincing to myself because of the subtlety in the Hoare's quicksort as shown in Hoare's quicksort is deceptively simple, the devil in selecting element at index hi as pivot, a slight modification of Hoare's partitioning, what happens if both indexes land on the pivot. Even if I have checked my proof tens of times, it might still miss a corner case or two. As shown/implied by many answers at why is writing down mathematical proofs more fault-tolerant than writing computer code?, a traditional mathematical proof for a moderate computer program is probably far from fully satisfactory or fully correct in general. It is more like how we can understand/believe the program is correct in a high level.

Instead, I have written a program that tests the implementation of Hoare's quicksort with that condition removed.

Here is the testing program.

That program tests the sorting algorithm against every permutation of every possible way $n$ competitors can rank in a competition, allowing for the possibility of ties, up to a certain number of competitors.

If a simple sorting algorithm like the current one does not work, it should fail for an array whose size is smaller than 8. For extra insurance, I have run that program against arrays size up to 11. These testing proves that condition is not needed.

Since many people would prefer a traditional proof, here is a sketch of a mathematical proof of the correctness of the implementation either with or without that additional check.

Let us assume l < r. Throughout the method, M is a constant reference to the array while l and r are constant indices. The pivot p = M[l] is constant, too. All we need to prove is that at the end of outer while loop, M[l] is the pivot, followed by elements not bigger than the pivot up to index j inclusively or no elements if l >= j, followed by all other elements, which are bigger than the pivot. (Then by mathematical induction on r - l, we can prove easily that the method does sort the subarray of M from indice r to l inclusively.)

To tell the truth, I used program to double check various invariants and propositions in the mathematical proof.

Many further questions can be raised, which go much beyond the scope of the current question.

213
Why is writing down mathematical proofs more fault-proof than writing computer code?
107
Quicksort Partitioning: Hoare vs. Lomuto
28
When is the minimum spanning tree for a graph not unique
13
Filling bins with pairs of balls
8
Hoare partitioning scheme in Quicksort
2
BST - Sufficient condition for connecting a node to a parent
1
Proof of a greedy algorithm concerning “Buy and Resell Problem”
0
Question regarding Hoare's partitioning scheme and a slight modification to it
0
What if Indexes in Hoare's Quick Sort Algorithm Both Land on Values Less than Pivot?