I have problem of inferring a rooted tree out of a connected simple graph.

The inference can be done by finding its minimum spanning tree, but the result is restricted by additional two types of condition:

Note that numbers on edges are their weights. So we will get s -> b -> c -> a if a normal min spanning tree is applied, but the direction of edge ac is wrong. On the other hand, we cannot use Chu–Liu/Edmonds' algorithm for spanning arborescence of directed graphs, because we don't know and cannot infer the direction of edge bc. 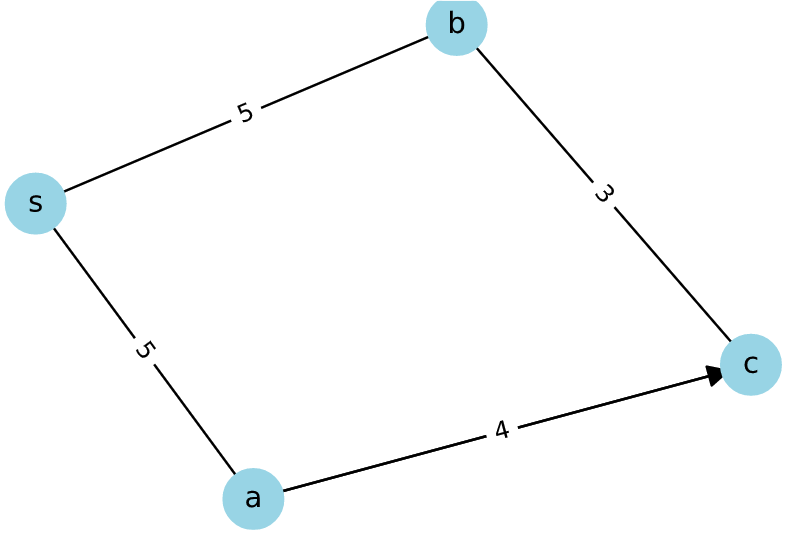 We can infer some edges' directions according to the position of the root. For example, in the example, we know s -> b and s -> a.

It seems that the problem can be solved by two steps:

In the final section of spanning tree, Wikipedia, oriented spanning tree is mentioned and a paper [levine2011sandpile] is referred. The problem fits the setting. It says:

Given a vertex v on a directed multigraph G, an oriented spanning tree T rooted at v is an acyclic subgraph of G in which every vertex other than v has outdegree 1.

Note that the term "outdegree" is a bit confusing, which I think should be "indegree". But it doesn't matter, because it just restricts the simple subgraph to be a directed tree with root being source or sink.

But it is not clear to me how an algorithm can be implemented according to that paper.

Not the answer you're looking for? Browse other questions tagged graphs weighted-graphs minimum-spanning-tree spanning-trees or ask your own question.