What algorithm will visit each node in a graph a number of times equal to the number of paths to that node from the root?

First Few Iterations of the Algorithm

We have an algorithm in which a squirrel visits the nodes of a directed graph.

Our graph has two colors of edges: black and white.

Initially, the graph has black edges only, and no white edges.

There is always zero or one white-edge between two nodes, but never two white edges going in opposite directions.

No matter what iteration of the algorithm we are on, white edges always describe a path beginning at the root node where no nodes are repeated on that path.

Our squirrel begins at the root node. The squirrel will always be stationed at one of the graph's nodes.

We move the squirrel node-by-node to trace an arbitrary path beginning at the root node.

With each step, the squirrel draws a white arc from the node it came from to the most recently visited node.

Initially, our algorithm looks like depth-first search, but it will change later.

At this point, the graph contains exactly one white path.

The graph will always have just one white path.

As this point, we order the squirrel to back-trace a short ways, deleting white edges as it goes.

At all times, the graph must contain exactly one white path.

We re-visit the same vertex many times. In particular, we should leaf-ward visit node $x$ the same number of times as the number of paths from the root to node $x$.

This is not canonical depth-first search of a graph because we do visit the same node many times.

We cannot visit a node if that node is already in the "active" (white) path.

I am stuck (not sure what to do) after the first deep path is constructed.

Suppose you had a maze with a single starting point. I asked you for an algorithm which would provide me with the $(x, y)$ coordinates of every dead-end in the maze.

One is tempted to use something like depth-first search.

There are some complications:

Question about an Algorithm

Can you describe an algorithm which:

We will eventually provide a mathematically formal definition of a “pseudo-sink”.

Informally, a node is a “pseudo-sink” if there exists a path going to that node which cannot go any further without repeating a node previously seen on the path.

Here is a picture of a rooted graph. 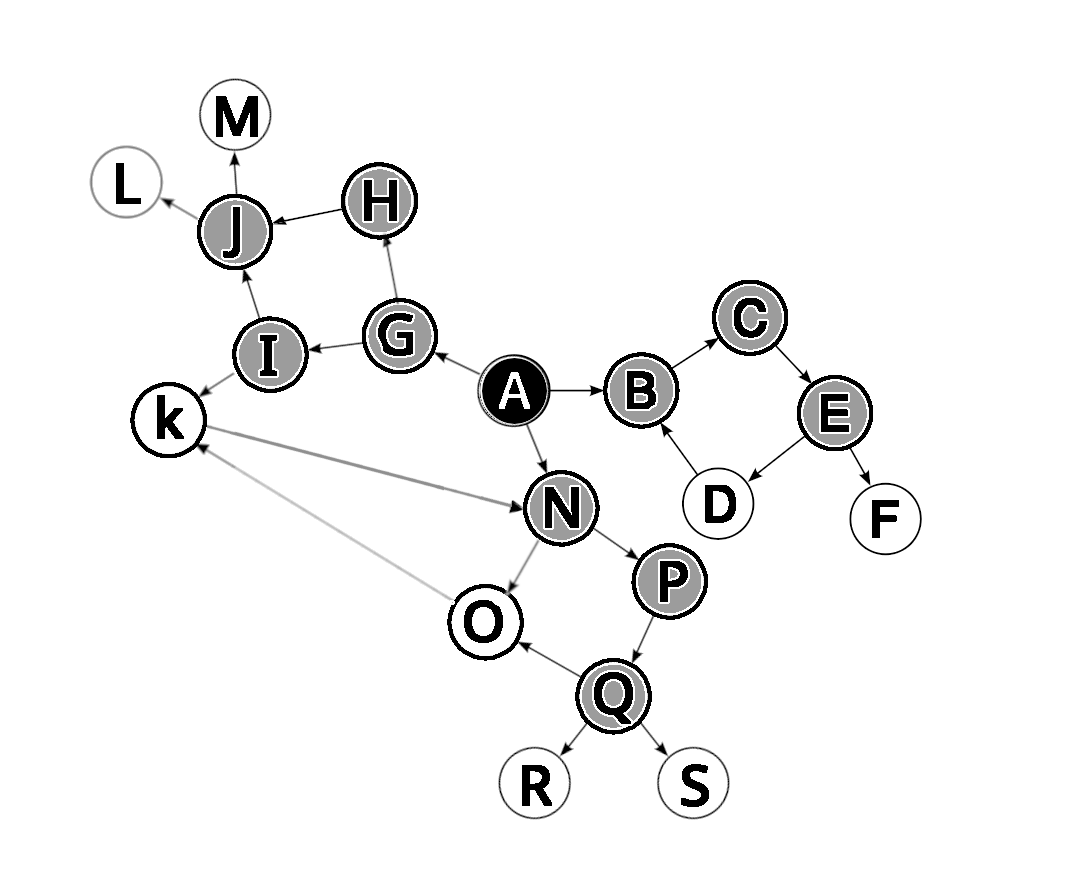 The black node is the root-node.
The white nodes are pseudo-sinks.
Grey nodes are not pseudo-sinks and are not the root node either.

A rooted digraph is a digraph which has exactly one of its vertices designated as a special “root node”.

Definition of path: In the definition given above, a path is not allowed repeat any vertices. Also, a path's first node may not be the same as the last node in the same path.

Note that we allow $G$ to have self-loops $\begin{pmatrix}(x,x)\in AS \end{pmatrix}$.
An example of a digraph might have:

A Pseudo-Sink of digraph $G$ is any leaf-node of the “Path Tree” rooted at node $r_{G}$ in directed graph $G$.

In pseudo-code, for any object x and function f feel free to assume that both of the following are equivalent:

$\mathtt{KIDS}(\mathtt{Knode} \text{ } \mathtt{vert})$: returns an ordered container to the children of node $\mathtt{vert}$.
As some example pseudo-code, we might write the following:

The input to our algorithm is not necessarily a tree object. However, we may wish to build a tree as an intermediate step.

Here is a recursive algorithm, written in Python. For simplicity, assume vertices are $0,\cdots, n-1$.

The idea is basically the same as that of the usual depth first search. At each recursive call, the algorithm will explore all paths that starts from the current source node without revisiting any visited nodes. However, when it back-traces from a visited node, it will consider that node as unvisited. This extension of unvisited nodes enables the algorithm to traverse all paths without using exponential working memory.

A squirrel can search a graph/maze by following procedure complete_dfs recursively.

39
Algorithm that finds the number of simple paths from $s$ to $t$ in $G$
1
Find a source-sink-path that touches a subset of edges
1
Limited number of calls to a black box for finding longest path in graph given an access to oracle
5
Complexity of a graph parity-coloring problem
3
Algorithm for minimizing the number of "inversions" in a graph
1
What's the most time efficient way to find the number of nodes reachable from each root and no other root?
1
How to remove 'skip' edges from a DAG? (How to find only the longest path from each node to each of its sinks?)