How to Think About Algorithms - Jeff Edmonds 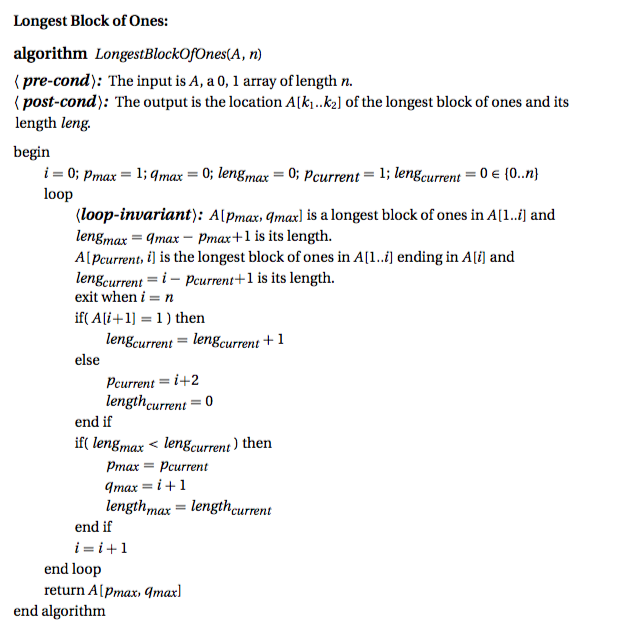 The problem asks to find $\sum$, Q, δ, s, and F of this program if we see it as an automaton. Edmonds characterized this as deterministic non-finite automaton since 'n' is not bounded.

but even if I use this brute force approach I can't easily define transition functions that determine the next state based on current state and the input read each iteration (0 or 1).

The biggest difficulty is modeling conditionals. When you are at a state q_1, the next state seems to be defined not just by 0 or 1 input but also by the length variables.

He didn't provide any solutions and I did a lot of research but still lost.

There are a number of ways to do this (you can use the same variables as the code essentially), but I think it's clearer to be more explicit. Each state can keep track of the following six things:

This then solves the transition problem:

There's no branching in either of those, so the process is completely deterministic.

A couple of examples to illustrate:

This actually pretty much covers all the cases (as there's really not much going on except the abuse of subscripts to count for us).

To boil that down to some rules for putting in the transitions:

You don't need any states where $m > n$, so you don't have to worry about that case (though you can include them and give them a rule like #3 if you want a complete infinite enumeration of all the subscripts.

Based on Luke Mathieson's amazing answer,

and using the concept of an "empty"** block from the book

The transition functions can be modeled as follows (difference being how we update starting position of the current run using the empty block):

the other two transition functions are excellently described in Luke's answer

Not the answer you're looking for? Browse other questions tagged automata finite-automata loop-invariants or ask your own question.

9
Difference between the languages accepted by two DFAs with different initial state/accepting states?
1
How does an automaton model a computer or something else?
5
Understanding the heuristic used for approximate string searching through an FSA
2
Prove: possible to construct automata accepting all strings of other automata sans 1-length strings
9
Is non-determinism in a non-deterministic turing machine different from that of finite automata and push down automata?
1
Complete finite automaton to never fail a match but either match original or up until the orginal
1
Difference Between Tree Automata and Tree Transducers
3
Understanding application of Arden's theorem to find regular expression
3
Do multiple transitions over the input give finite state machines more power?
1
How to build a finite automaton for right quotient of a regular language?