My idea: Create states Q that are named s and ss where $s\in \Sigma$. Make states named ss accepting if $ss \in L$

FA illustrated for the example above

What next? is this a good approach? I can't think of the next step on how to construct this doubled DFA for ALL languages.

The idea is to start with an automaton for $L$, and replace each transition labeled $\sigma$ by a path of length 2 both of whose edges are labeled $\sigma$. In order to make it a DFA, we also add a sink state. (This might be unnecessary in your definition of DFA.)

A simpler way of proving that the regular languages are closed under Double-Letter is using regular expressions: given a regular expression for $L$, simply double each letter. This is a special case of closure under homomorphism and regular substitution.

This a hand drawn solution to your problem, I'll explain the transitions,

Before you see the diagram, note that those are not 2 different DFAs, but I have drawn one more transition of states q1, q3, q5 to make the image more clear, as it is already very messed up. 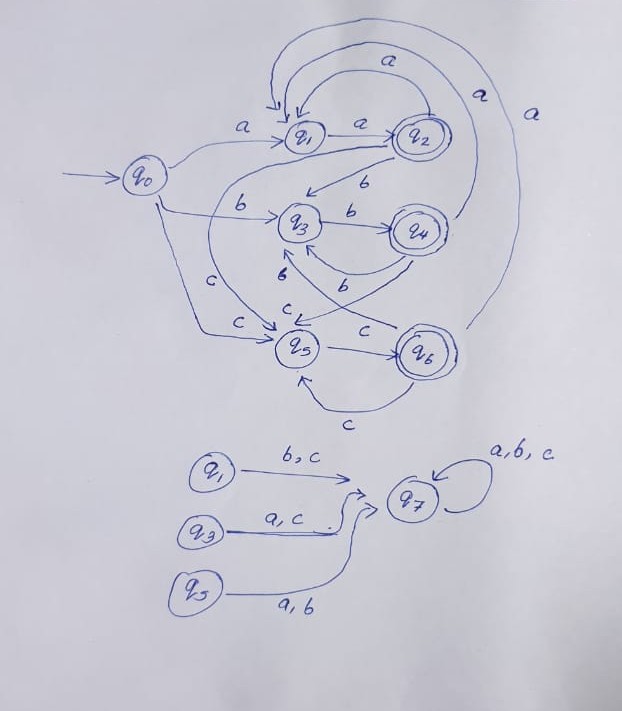 q0 is the start state, machine has not seen anything until now.

On scanning the first symbol, suppose, it turns out to be 'a'

machine is in q1 now.

If it sees another 'a' it will reach q2 which CAN BE the final state,

else it will reach q7 from where it will never reach any final state because 'a' has not repeated.

In that case q0 will be also be a final state.

Not the answer you're looking for? Browse other questions tagged automata or ask your own question.

11
Not able to convert from NFA to DFA
3
How Can I Recognize When to Use ε-Transitions in an NFA?
1
How do I describe a DFA?
3
Is $2^{1+\sqrt{mn}}$ an upper bound for the size of the DFA resulting from the determinisation of n DFAs of size m
2
Show that if Automata $A$ recognize language $L$, there also exists an automata $A′$ that recognize $Double(L)$
1
Minimal DFA with more states than its equivalent NFA
0
Closure on regular languages
2
Two-way finite automaton: How does the automaton remember the state
1
Reduce PDA for a given language