I am trying to translate and prove a theorem, originally written in first order logic (FOL), into a combination of equational logic (EL) and Boolean logic (BL) (more precisely a model of Boolean Algebra). The target language also permits Skolemization (Sk). So the translation task is from FOL to EL+BL+Sk. My motivation is that if my translation and subsequent proof in EL+BL+Sk are correct, then I should be able to perform such proofs using a Term Rewriting System (TRS). TRS can be used to prove equational theories. Because EL+BL is a sub-logic of FOL and Skolemization results in an equisatisfiable system, it is hoped that a valid proof in EL+BL+Sk is a valid proof of the original FOL theorem. Below is a FOL example and my attempt at a proof using natural deduction. This is followed by my attempt at translation and proof in EL+BL+Sk. See notes on translation/proof below. Finally, I include a proof written in CafeOBJ that uses term rewriting.

Is the tentative translation from FOL to EL+BL+Sk correct?

Is the tentative proof in EL+BL+Sk correct?

Does the proof in EL+BL+Sk count as a proof of the original FOL theorem? I am not sure how proof theoretic entailment ($\vdash$) in FOL relates to semantic entailment ($\models$) in EL+BL+Sk. Does ($\Gamma \models_{EL+BL+Sk} \varphi \iff \Gamma \vdash_{FOL} \varphi$) hold?

At least one person is liked by every person: $\exists y \forall x :Likes(x,y)$ 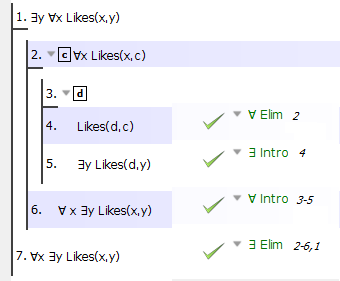 Below is the listing in CafeOBJ using TRS. The command red reduces a given term by regarding declared equations as left-to-right rewrite rules. The syntactic details of CafeOBJ are not hugely important. I hope that the relation between the two proofs can be seen in the image below. 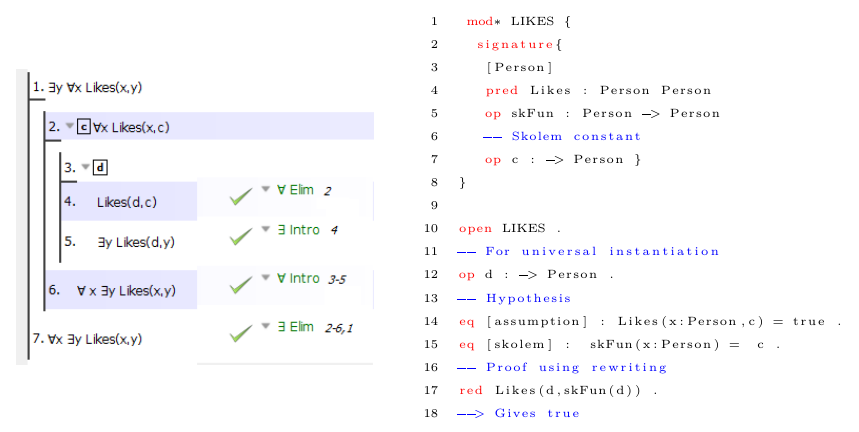 The trace of the CafeOBJ proof is basically the same as the manual proof in EL+BL+Sk above.

Browse other questions tagged logic proof-techniques first-order-logic or ask your own question.

4
Can every sentence of first-order logic be converted into an equisatisfiable equation in Boolean algebra?

14
Confluence proof for a simple rewriting system
15
Type inference with product types
1
What is the point of (Compactness theorem in the) Overspill principle?
7
What is the purpose of interpreting elements in the proof of reduction of PCP to validity decidability problem of predicate logic?
3
Resolution in First Order Logic
2
First Order Logic : Predicates
4
SAT Solver Front-End: Strategy to order Quantifiers