I was going through the text Introduction to Algorithm by Cormen et. al. where I came across an excerpt which I felt required a bit of clarification.

The excerpt from the text which made me ask such a question is as follows:

In context of the analysis of quicksort,

In the average case, PARTITION produces a mix of “good” and “bad” splits. In a recursion tree for an average-case execution of PARTITION, the good and bad splits are distributed randomly throughout the tree. Suppose, for the sake of intuition, that the good and bad splits alternate levels in the tree, and that the good splits are best-case splits and the bad splits are worst-case splits. Figure(a) shows the splits at two consecutive levels in the recursion tree. At the root of the tree, the cost is $n$ for partitioning, and the subarrays produced have sizes $n- 1$ and $0$: the worst case. At the next level, the subarray of size $n- 1$ undergoes best-case partitioning into subarrays of size $(n-1)/2 - 1$ and $(n-1)/2$ Let’s assume that the boundary-condition cost is $1$ for the subarray of size $0$.

The combination of the bad split followed by the good split produces three sub- arrays of sizes $0$, $(n-1)/2 - 1$ and $(n-1)/2$ at a combined partitioning cost of $\Theta(n)+\Theta(n-1)=\Theta(n)$. Certainly, this situation is no worse than that in Figure(b), namely a single level of partitioning that produces two subarrays of size $(n-1)/2$, at a cost of $\Theta(n)$. Yet this latter situation is balanced! 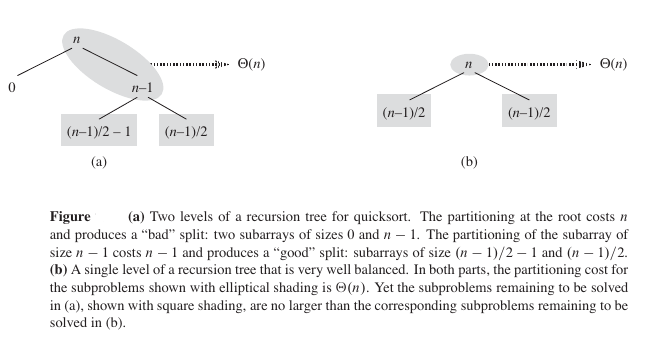 Not the answer you're looking for? Browse other questions tagged algorithms algorithm-analysis asymptotics runtime-analysis or ask your own question.