I am looking for an algorithm to solve the following problem:

OUTPUT: a set of $n-1$ axis-parallel interior-disjoint squares, such that the boundary of each square contains at least two points. (*)

Here is an example of input (left) and possible output (right) for $n=4$: 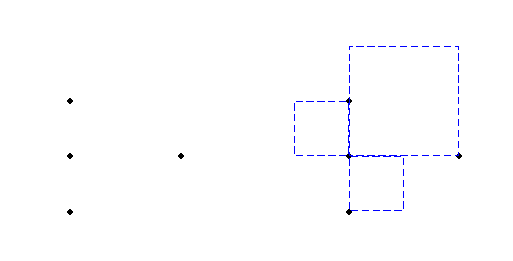 Efficiency is not a concern right now - the time complexity may be exponential in $n$ (since I will usually use this algorithm with small $n$'s).

My first thought was along the following lines:

How would you approach this problem?

(*) NOTE: I don't know whether such a set of $n-1$ squares always exists. I want to play with points in order to gain some intuition about this question and maybe find a counter-example.

It is true that there there can be infinitely many possible squares that touch those points at the given sides, as you explain in the question. However, you can always reduce this to looking at finitely many possibilities. In particular, I think it suffices to consider at most $2n$ candidate squares, out of this infinite set: the $n$ candidates whose bottom (south) side is at $y$-value $y_1$, $y_2$, ..., or $y_n$, and the $n$ candidates whose top (north) side is at $y$-value $y_1$, $y_2$, ..., or $y_n$. In other words, you can consider only cases where the lower-left corner is at one of the points

Of course, any square that contains some other point in its interior can be immediately ruled out.

(I don't have a proof of this statement; this is just what my intuition suggests.)

I'm not quite sure what to do if both points are on the same side (e.g., they have the same $x$-value or the same $y$-value). Perhaps we can use a similar argument to argue that there are at most $(2n)^2$ candidate squares that must be considered, but I'm not sure.