I am interested in testing for a given string (w) whether it is in the language (L) defined by a nondeterministic finite automaton (A). I have some blurry point in my mind.

What is the complexity of this test by using the NFA and backtracking? Assume my NFA has m states and string (w) has length n (|w| = n). For regular expressions, by using Thompson's algorithm, the resultant NFA has the same complexity (worst case) if I use backtracking?

What are the methods/algorithms other than backtracking and converting to DFA?

A naïve backtracking algorithm will still result in exponential behaviour ($O(2^{n})$ where $n$ is the length of the input string). This behaviour can occur even with very small automata (i.e. where the number of states $m$ is a fixed constant).

Consider for example the NFA $M$ below: 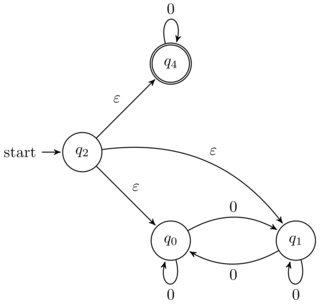 So even with only 4 states and where every string is valid, we can still get terrible performance from a backtracking approach.

There is a much better approach however. Even without converting the NFA to a DFA we can decide acceptance in polynomial time. As we are dealing with a regular language, we don't need to remember the entire computation history up to this point (which is what backtracking does), we only need to know what state we are up to at the current point. In a DFA this is very easy, as we can only be in one state at any point, but an NFA (without knowing the final computation path) allows more possibilities. However we can simply keep track of these possibilities. The algorithm is as follows:

So all the algorithm is really doing is keeping track of all the states we could be up to after having read $k$ symbols from the input.

Assuming that the NFA is fixed, this algorithm is $O(n)$-time in the length of the input string. If the NFA is part of the input, it's a little more complicated, but still polynomial time - $O(m^{2}n)$ where $m$ is the number of states (if I haven't missed an implicit loop in there).

Not the answer you're looking for? Browse other questions tagged automata nondeterminism or ask your own question.

8
For what kinds of languages is min |NFA| = Ω(min |DFA|)?
0
NFA and DFA storage cost
1
Converting a NFA to its equivalent regular expression
0
Modify DFA/NFA that accepts Language Subset with only Palindromes (with Size Limit)?
1
Two way finite state Automaton NP Compleness definition clarification?
1
Number of states in NFA and DFA accepting strings from length 0 to n with alphabet Σ= {0,1}
1
Check if a NFA accepts a string of non-prime length
3
Efficient algorithm to find a rejecting input of an NFA