$n$ professors go to a conference and have to sit together at a table. See illustration below for $n=8$ 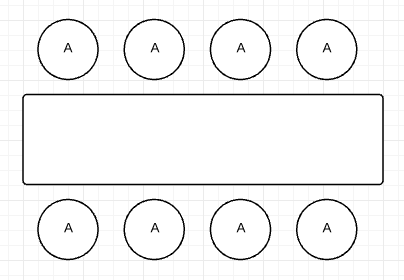 I wrote the following program to calculate the # of different arrangements for given value of $n$ (assume even $n$) according to above formula.

Assuming that you are trying to maximize the seating preferences, this problem is NP-Hard =(.

Specifically, consider the decision version of this problem: Given a matrix of preferences, is there some way to assign people to seats such that the total score (sum of resulting preferences of professors to their nearby neighbors) obtained is at or above some $k$?

This problem is NP-Complete.

First, clearly this decision problem is in NP, as if one can provide you with such an assignment then you can compute the total score and verify that their solution works.

Next, note that this problem is essentially equivalent to finding two distinct highest-cost paths that go through the same amount of nodes, and together go through every node. Using this idea, we will solve the hamiltonian path problem.

The question "is there some way to assign seating positions to professors such that the total score obtained is greater than or equal to $\vert V_1 \vert + \vert V_2 \vert$" is NP-Complete, as it is only possible to do this if a hamiltonian path exists in both graphs.

NP-Hardness just guarantees that a problem can't always be solved exactly unless $P=NP$, however, it doesn't tell us anything about how difficult it is to approximate. Here is one idea I had, it's incomplete, but is at least something to get you started.

For simplicity, I will now consider the problem where there is a single circle of chairs, and we are trying to place professors in the same way you require. We will also restrict all preferences to be greater than or equal to 0. This can most likely be extended to your problem but I haven't got around to that yet, so I will update this problem once that is accomplished, or you can do this yourself.

With this "roundtable" problem, it turns out there is an algorithm I found that is guaranteed to find a solution that is no less than 8 times the optimal solution.

This algorithm does the following:

This is guaranteed to halt in polynomial time because each swap strictly increases the total score (I think? Still a little fuzzy about this part but I'm fairly sure that is true and will formalize it in a bit).

Because either our algorithm swapped $x$ with $y$, or there was equal score regardless of the swap, in which case we have

Note that we technically also know

If we sum all of the edges on both sides, we get

which is a factor 8 approximation, as desired.

Not the answer you're looking for? Browse other questions tagged algorithms counting assignment-problem or ask your own question.