My question deals with the algorithm of computing the convex hull in 2D by Preparata.

Now our first task is to find the common tangents of $CH(A)$ and $CH(B)$. My question is about finding the right tangent. 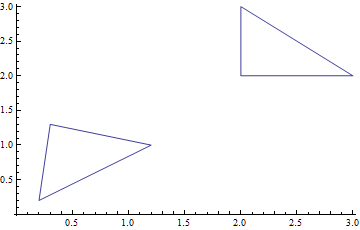 However the criterion that Preparata claims does not select $(0.2,0.2)$ as the left endpoint, since it does not satisfy $(2)$, but $(0.3,1.3)$. Why does this occur? Does Preparata's algorithm have some other claim that it needs to be correct?

Here is a link to the original paper:

The section I'm referring to is called "Merge Algorithm for Two-Dimensional Sets."

algorithms computational-geometry
Share
Improve this question
asked May 21 '16 at 2:07

The paper of Preparata and Hong says:

So, in this notation, vertices in your two polygons will be numbered differently:

This paper has been published long time ago, and since then this algorithm has been clarified and simplified. The newest version of it starts from the rightmost vertex on the left polygon and the leftmost vertex on the right polygon, and continues clockwise for the left polygon and counterclockwise for the right polygon (to find lower tangential line). Also they usually check a vertex location relative to a line using the dot product instead of calculating and comparing slopes - because the tangential vertex has to have both its neighbors on the same side of the tangential line. For more information, pictures and code - please see this monograph, Section 3.8.