Why half of the medians are greater than the median of medians?

I already saw similar question Counting elements that are greater than the median of medians but I couldn't find my answer in there.

CLRS (3rd ed.) give an algorithm for $O(n)$ worst case arbitrary order statistic of $n$ distinct numbers. This is the algorithm:

My problem is the steps 2 and 3. It claims

at least half of the medians found in step 2 are greater than or equal to the median-of-medians x.

Because $x$ is the median of all the $\lfloor n / 5 \rfloor$ medians obtained in Step 2, it is smaller than or equal to half of those medians by definition of median. See the figure below (from CLRS, the 3rd edition; Figure 9.1).

The problem with your example is that you are finding the median-of-medians $x$ recursively, however, without completing all the recursive steps. You should not stop at Step 3 (the "median of medians" step) in the recursion. Continue the remaining steps. In particular, in Step 4, you will use the "Partition" procedure to establish relationships between the medians obtained in Step 2 and this median-of-medians $x$.

For your added problem: You find it recursively. Why is the time complexity $O(n)$? Well, you can follow the analysis in CLRS. 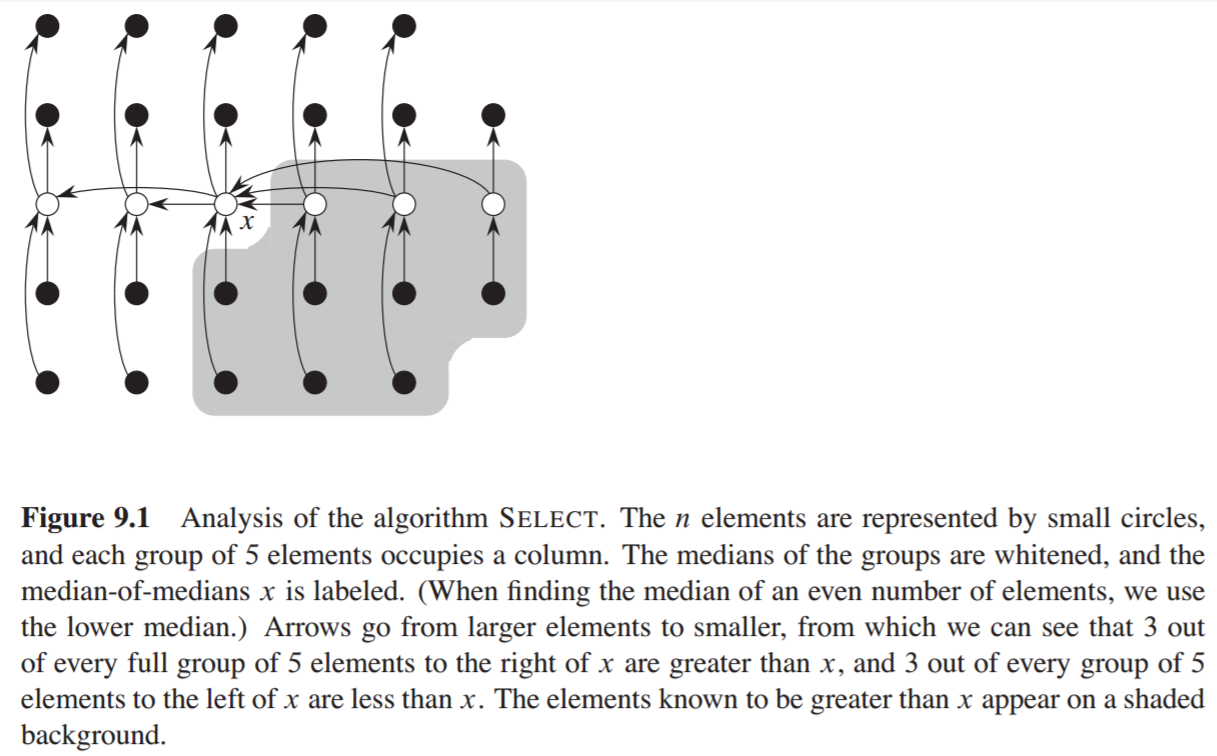 The answer is easy: because the median-of-medians is... the median of the medians. (By definition, the median of a set of values is larger and smaller than half of these values.)

But the important property in the design of the algorithm is that the median-of-median is also guaranteed to be larger and smaller than a quarter of the values in the array (not just the medians), so that it is a good partitioning pivot. (This guarantees that the number of remaining elements after a partition decreases exponentially.)

2
Counting elements that are greater than the median of medians