Maximal expansion of a convex polygon

NOTE: $Y$ does not have to have maximum area; it only has to be maximal.

What is an algorithm for finding such $Y$?

We first define operation $extend(s,t)$ which

$extend$ is the only operation we'll use. Therefore, $CH(S) \subset Z$ by construction. We only need to select a sequence of extensions so that $CH(S)$ is maximal.

The algorithm consists of $2$ phases:

The following example demonstrates the algorithm (I omit steps which don't modify $S$, but we should try all vertices of $Z$ (including holes' vertices) and all edges of $CH(S)$): 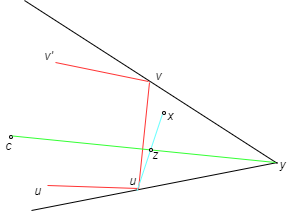 Complexity. We first need to estimate the complexity of $extend$. One can do this with a binary search: for a candidate, build a convex hull and check if it lies inside of $Z$. The convex hull can be built in $O(n)$ (since we only need to add one point) and an intersection with $Z$ can be checked in $O(n)$, so the total time is $O(n \log (precision))$. I suspect that it's possible to get rid of binary search and get $O(n)$ or $O(n \log n)$ time.

Now, we need to estimate the number of calls of $extend$. There are $O(n)$ calls of $extend$ in the first phase. In the second phase, each time we successfully perform $extend$ (i.e. the area of $CH(S)$ increases), one of two things happen: