Is it viable to use an HMM to evaluate how well a catalogue is used?

I was interested on evaluating a catalogue that students would be using to observe how is it being used probabilistically.

The catalogue works by choosing cells in a temporal sequence, so for example:

Assume that the cells of the table are states of a Hidden Markov Model, so the transition between states would map in the real world to a student going from a given cell to another.

Assuming that the catalogue is nothing more than guidance, it is expected to have a certain kind of phenomenon to occur on a given artifact. Consider this artifact to be unique, say, for example a program.

Finally, consider the catalogue to be structured in a way that initially it is expected that the probability to start in a given cell is equal. The catalogue does not suggest any starting point.

Ad Question 1: Assuming that your assumptions on how the catalogue is used -- that is the choice of the next cell only depends on the current (or constantly many preceeding) cell(s), not the (full) history -- then yes, you can use a Markov Chain to model it.

However, you do not seem to need the "Hidden" part; this is only useful if you have (probabilistic) output in the states which you observe. In contrast, you want to observe the students' cell states directly.

Imagine you can not observe which cells students are in but only how much they like the current cell; this could be implemented by notorious "Was this useful to you?" buttons; in general, assume every students gives feedback from $\{1, \dots, k\}$ in every cell but you do not know which cell they are in. Then you can use a HMM to estimate their cell sequence given their feedback sequence.

Ad Question 2: Let me illustrate the use continuing above train of thought. For $n=k=3$, we have the following Markov chain: 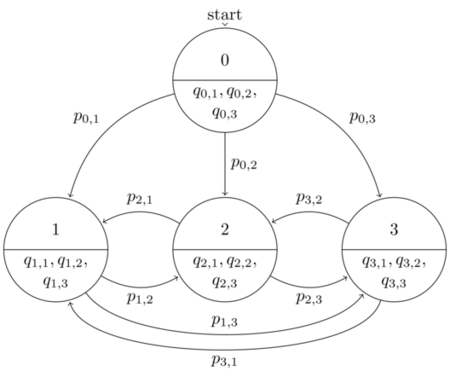 In a real world scenario, we would have to train our Markov chain. Let us assume we have some sequences of both state and output²:

Now we just count how often each transition and output happened and set our probabilities to the relative frequencies³: 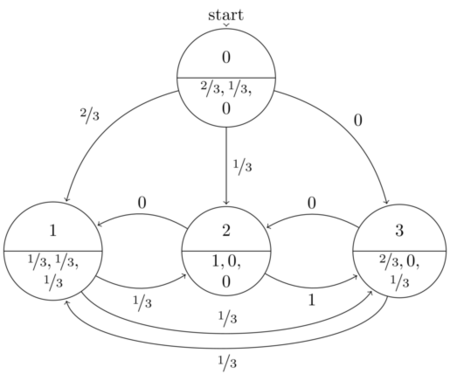 Bottom line: yes, you can use Markov chains resp. hidden Markov models (depending on your needs) to model your scenario. Wether the fundamental assumption -- the probability for the next cell only depends on the current cell -- makes sense is another question entirely.

Not the answer you're looking for? Browse other questions tagged probability-theory empirical-research modelling hidden-markov-models or ask your own question.

6
What are the uses of Markov Chains in CS?