Can every sentence of first-order logic be converted into an equisatisfiable equation in Boolean algebra?

There may be some theoretical literature, unknown to me, that addresses this question. If possible, I would like a practical approach to this problem. My attempt involves the use of an equational specification language called CafeOBJ (see introduction). In particular, the BOOL module can be viewed as a formalisation of propositional logic defined by a set of equations. My basic idea is to transform First Order Predicate Logic sentences (FOPL) into order-sorted equations consisting of Boolean valued functions (BVF). Then in proofs the BVF are instantiated with constants and proofs are executed using term rewriting. See related question. My main concern with the proposed approach is that variables are in scope for the entire transformed sentence. There can be no nested or local quantifiers within a sentence. It seems that equational deduction used in the proposed proofs is sound and complete.

Below, I present my proposed translation, proof method, and an example.

FOPL sentences are transformed to equational form as follows.

For example the FOPL sentence

The variables are each given a sort or type. Note, the Skolem function $G(x)$ has only one argument because the $y$ in the antecedent is not in scope in the consequent. The general form of which is $LeftEqName_1(Args)=Expression_{BVF}$. Because we have sorts (or types) in CafeOBJ, we do not need the predicate $Animal(y)$.

A combination of Equational Logic, Boolean Algebra, and order sorted term rewriting is used for proof. The general form of the proof is:

This is intended to represents an implication whose antecedent is the conjunction of the original FOPL sentences. The consequent ($BVF$) is the Boolean valued function to be proved. I have only considered this idea for single $BVF$s, I have not considered more complex expressions in the consequent. Universal quantified variables in the original equations are replaced by fresh constants in the proofs.Universal quantified variables can also be instantiated by constants from the original set of FOPL sentences. The Theorem of Constants states that universal variables in the original equations can be replaced by fresh constants in a proof. The Theorem of Constants is broadly similar to universal elimination. Perhaps the Deduction Theorem might provide the formal basis of my proposed proof method.

I use CafeOBJ's term rewriting command called reduce , which recursively matches each term with the appropriate left-hand side of an equation and replaces it with the right-hand side, CafeOBJ reduces a logical formula into an exclusive-or normal. A term of Bool reduces to an exclusive disjunction of conjunction. It is known that the exclusive-or normal form is true if the input term is valid, and false if it is unsatisfiable.

Below is a CafeOBJ order sorted example of the proposed method. In this case no universals are needed in the proof, we only need constants from the original FOPL sentences. I also include a single-sorted FOPL version that uses natural deduction in its proof. 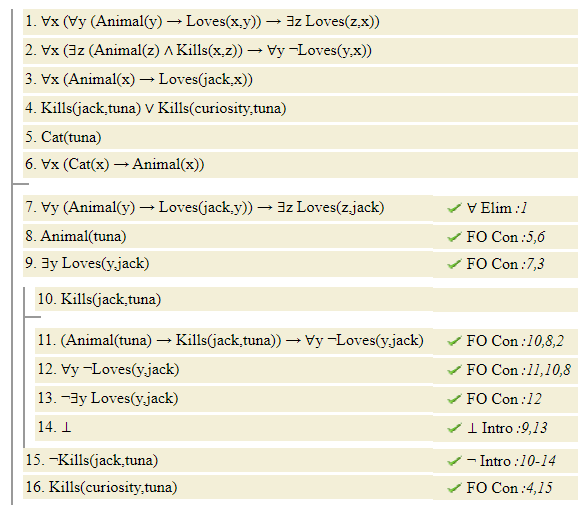 The FOPL proof uses natural deduction. Lines 1-6 are axioms which are assumed to be true. The justification for each proof step are listed on the right. The text ‘FO Con’ means first order consequence, which uses well known FOL proof techniques e.g. Line 16 is justified by disjunctive syllogism from lines 4 and 15.